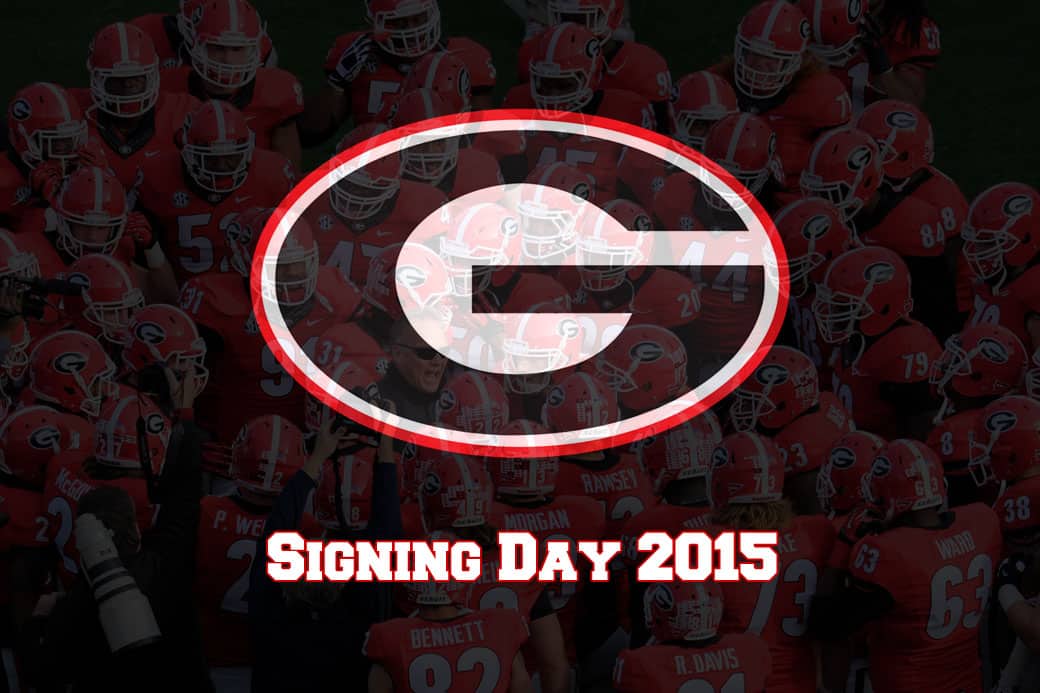 Wednesday, February 4 is National Signing Day 2015. The Georgia Bulldogs are once again expected to sign a Top 10 class.

Mark Richt and the Dawgs currently have 25 verbal commitments. Georgia’s 2015 class is currently ranked 3rd by Scout.com, 6th by Rivals.com, and 7th by 247Sports.

The Dawgs are hoping to land a few of their big-time uncommitted targets:

Of that group, Georgia appears to be in good shape with Pat Allen and Rico McGraw. Terry Godwin will also stick with UGA based on some recent reports.

Roquan Smith would be a huge pickup for the Dawgs, as would DaQuan Hawkins and Nick Buchanan.

As we do each year, SicEmDawgs.com will post the 2015 UGA Football Signees as they come in. We will also update this post throughout the day (see “Live Signing Day Updates” below). Feel free to join the signing day discussion in the comments section at the bottom.

7:35am – 3-Star CB Juwan Briscoe of Waldorf, MD is officially a Bulldog!

8:45am – 4-Star OL Patrick Allen has committed to the Georgia Bulldogs!

8:47am – 3-Star DT DaQuan Hawkins committed to the Georgia Bulldogs live at the College Football Hall of Fame in Atlanta.

11:23am – Rico McGraw has officially signed with the Dawgs.

11:30am – 4-Star LB RoQuan Smith committed to UCLA over UGA in a live ESPNU announcement.

11:53am – 3-Star Safety Kirby Choates of Atlanta has committed to UGA!

12:47pm – 3-Star WR Shaquery Wilson of Miami, FL, who flipped his commitment to West Virginia last week, will sign with UGA per reports.

1:12pm – Georgia may be back in it for 4-Star WR Van Jefferson. He makes his announcement at 1:30pm. OL Nich Buchanan announces at 2pm.

1:40pm – WR Shaquery Wilson has officially flipped back to UGA!

1:50pm – Shaquery Wilson has sent in his LOI to Georgia.

3:55pm – Van Jefferson will sign with Ole Miss over Georgia and Michigan.

5:35pm – Terry Godwin’s announcement is coming up around 6-6:20pm on Fox Sports Net (maybe Fox Sports South depending on area).

6:30pm – Roquan Smith has re-opened his commitment and will choose between Georgia, Michigan, Texas A&M, and UCLA. Could be a couple of days before he decides.