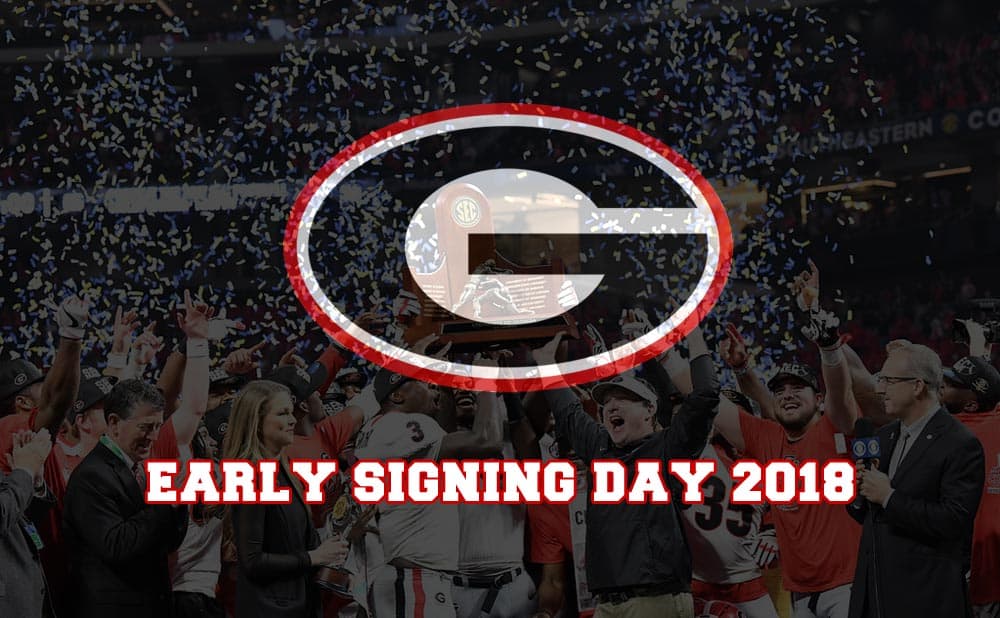 Several recruits that are committed to UGA will sign on Wednesday. Below is the list (all times Eastern):

The Dawgs are hoping to land some more big-time uncommitted targets on signing day. Below are the recruits and the time they are expected to announce (all times Eastern):

As we do each year, SicEmDawgs.com will post the 2018 UGA Football Signees as they come in. We will also update this post throughout the day (see “Live Signing Day Updates” below). Feel free to join the signing day discussion in the comments section at the bottom.

7:50am – 4-star WR Elijah Moore of St. Thomas Aquinas has decided to sign with Ole Miss, per the Sun-Sentinel. Rivals reports that Georgia backed off of him.

9:50am – 4-star tight end John FitzPatrick of Atlanta has signed his LOI with UGA.

10:05am – 4-star WR Kearis Jackson of Fort Valley, GA has signed with the Bulldogs.

10:07am – 5-star OL Jamaree Salyer has committed to Georgia! A huge pickup for Kirby Smart and the Dawgs.

10:52am – 5-star OL Jamaree Salyer has officially signed with Georgia.

11:39am – 5-star RB Zamir White from Laurinburg, NC has signed his letter of intent with Georgia.

11:56am – 4-star DB Azeez Ojulari and 4-star DB Chris Smith have both officially signed with UGA.

12:26pm – 5-star QB Justin Fields has signed his letter of intent with the Georgia Bulldogs.

6:44pm – A big surprise for Georgia! Four-star cornerback Nadab Joseph has flipped from Alabama and has signed with the Bulldogs.