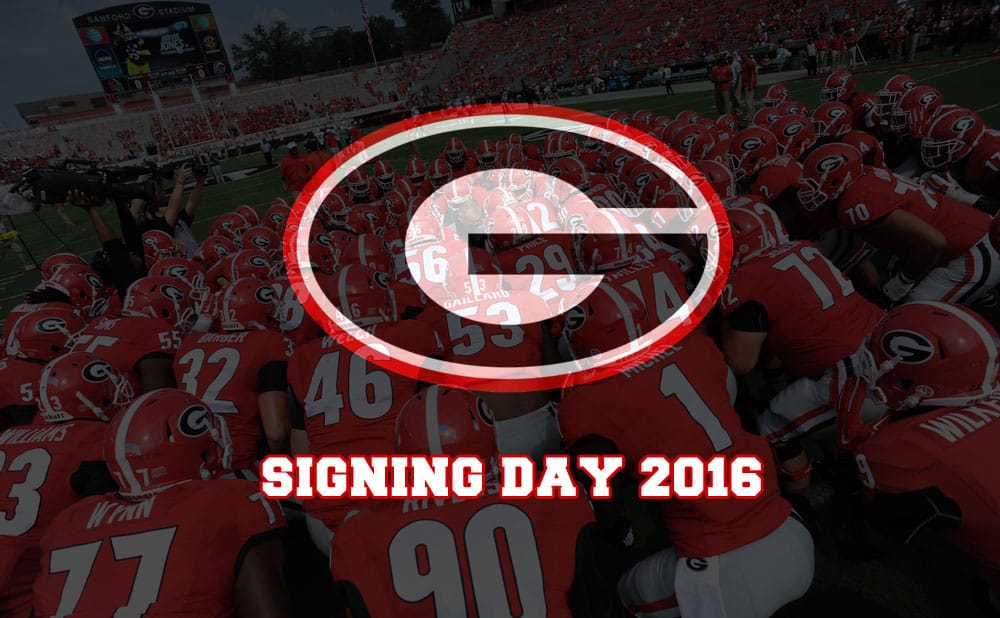 Wednesday, February 3 is National Signing Day 2016. The Georgia Bulldogs are once again expected to sign a Top 10 class.

The Dawgs are hoping to land a some more big-time uncommitted targets on signing day. Below are the recruits and the time they are expected to announce (all times Eastern):

As we do each year, SicEmDawgs.com will post the 2016 UGA Football Signees as they come in. We will also update this post throughout the day (see “Live Signing Day Updates” below). Feel free to join the signing day discussion in the comments section at the bottom.

8:13am – 3-Star Punter Marshall Long of China Grove, NC has signed his LOI.

8:24am – 4-Star WR Charlie Woerner of Tiger, Georgia has signed his letter of intent.

8:42am – 5-Star athlete Mecole Hardman, Jr. of Elberton, Georgia has committed to UGA!

9:07am – Georgia has received the signed letter of intent from 5-Star athlete Mecole Hardman, Jr.

9:12am – 4-Star DT Michail Carter has committed to UGA over Alabama!

9:30am– 4-Star running back Elijah Holyfield of Atlanta, Georgia (Woodward Academy) has signed with UGA.

9:34am – 3-Star wide receiver Tyler Simmons has flipped his commitment from Alabama to Georgia!

9:45am – 3-Star offensive tackle Solomon Kindley of Jacksonville, Florida has signed with Georgia.

10:14am – 5-Star linebacker Ben Davis has committed to Alabama over Georgia and others.

10:37am – 3-Star DB Jaewon Taylor will sign with Florida over Georgia and others.

10:38am – 4-Star OT Jauan Williams has committed to Florida State over UGA and others.

11:45am – Regarding the size of the 2016 signing class, UGA head coach Kirby Smart said he is “…not as concerned about how many as I am who.”

2:06pm – 5-Star LB Lyndell “Mack” Wilson of Montgomery, Ala. has committed to Alabama over UGA and others.

4:51pm – In case you missed it last night, 3-Star WR/S Joshua Moran of Alpharetta, Georgia committed to UGA as a preferred walk-on.

5:33pm – 4-Star LB Jaleel Laguins of Watkinsville, Georgia has reaffirmed his commitment and will sign with UGA.

That should close out Georgia’s 2016 class with the possible exception of 5-Star WR Demetrius Robinson of Savannah. He won’t announce for at least a week and is also considering Stanford, Notre Dame, and Alabama.