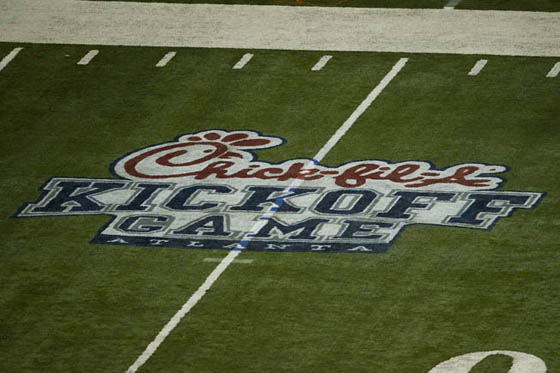 Last week, it was reported that Georgia could possibly face Florida State in the 2016 Chick-fil-A Kickoff Game at the Georgia Dome in Atlanta.

“While that game may make you whole from a budget standpoint. …we’re very sensitive to the community,” McGarity said. “Is that the best thing for our community? There’s no question it is not. I’ve kept an open mind.”

McGarity would rather have seven games in Athens every year, and playing FSU in Atlanta would likely mean UGA wouldn’t hit that target number. Most big schools want that 7th home game for budget reasons.

Next week at the Spring meetings in Destin, the SEC is not only expected to release the 2014 football schedule, but also to discuss a possible nine-game SEC schedule for the future.

Those discussions will directly impact Georgia’s chances of playing Florida State in 2016. If the SEC moves to a nine-game slate by that season, the Georgia-FSU game will surely not happen.

But if the conference remains at eight games, there is a possibility the game could happen. Georgia currently has two non-conference games lined up for the 2016 season – Georgia Southern (Nov. 19) and Georgia Tech (Nov. 26), both home games.

If Georgia has four home SEC games in 2016 (remember Florida is played in Jacksonville), the Bulldogs can line up another “buy” game against a mid-to-lower level FBS team. That would enable them to play Florida State in Atlanta.

That is, if the financial arrangements are agreed upon and McGarity approves the contest with head coach Mark Richt.