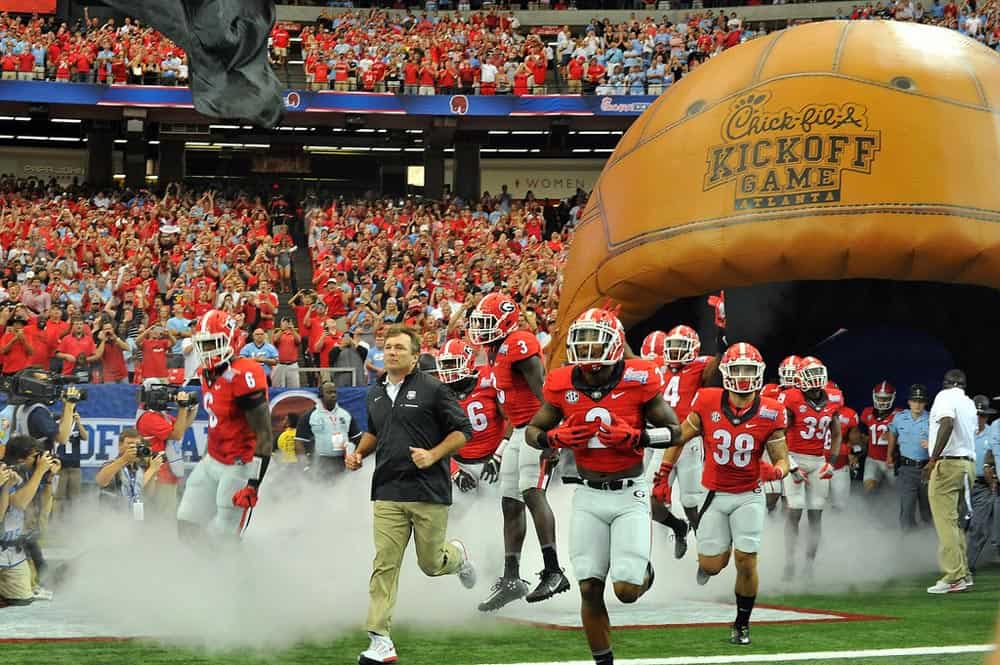 ATLANTA, Ga. – The Georgia Bulldogs and Virginia Cavaliers will face off in the 2020 Chick-fil-A Kickoff Game to cap off college football’s opening weekend in a prime time Monday night matchup.

The game is set for Monday, Sept. 7, 2020 and will be played in the new, Mercedes-Benz Stadium – currently under construction in Atlanta – which will open in 2017 and play host to the 2018 College Football Playoff National Championship, 2019 Super Bowl and 2020 NCAA Final Four.

The game will be nationally telecast by ESPN. Kick time is yet to be announced. All tickets will be sold through the university ticket offices.

“These two teams have a history with each other in our bowl game and we look forward to renewing this rivalry for another tightly contested game,” said Percy Vaughn, Chick-fil-a Peach Bowl chairman.

“Two teams with a very competitive history, a prime Monday night time slot, and a pair of talented, up-and-coming coaches make this matchup a marquee event to close out the opening weekend of college football,” said Gary Stokan, Peach Bowl, Inc. president and CEO. “This is certainly a memorable way to start the 2020 season in the Capital of College Football.”

“This game will provide another great opportunity to kick off a season in the sports capital of the South on national television and against an opponent with long-standing tradition,” said Georgia Head Coach Kirby Smart. “Like Georgia, Virginia has been playing football for well over 100 years and I’m sure this will be a popular matchup with both fan bases, as well as football fans in general. We are appreciative of the opportunity and look forward to returning to Atlanta for the 2020 Chick-fil-A Kickoff Game.”

“This will be a great chance to play a Power 5 ACC opponent in a world-class venue,” said Greg McGarity, University of Georgia’s J. Reid Parker Director of Athletics. “We actually have a history with Virginia that goes back to the first meeting in 1897, a game coincidentally played in Atlanta. The game will be a popular event with both Georgia and Virginia fans. We look forward to our return to the Chick-fil-A Kickoff Game in Atlanta and starting the 2020 season against UVA.”

“Having the chance to open the college football season in the Chick-fil-A Kickoff Game is a fantastic opportunity for our program,” said Virginia Head Coach Bronco Mendenhall. “Players love to compete on the largest stage and Atlanta is a great location for our fans to spend the Labor Day weekend. I cannot imagine a better setting to open the season than to face Georgia in what I’m told will be one the nation’s finest stadiums. The Chick-fil-A Kickoff Game has a reputation of being an amazing experience for both teams and we are appreciative of this invitation.”

“We look forward to returning to Atlanta to be part of what’s becoming a great college football tradition to kick off the season in 2020,” Virginia Athletics Director Craig Littlepage said. “Gary Stokan and his staff are truly committed to delivering first-class experiences to both the participating teams and their fans. It’s an honor to represent the ACC in this game and our expectation is we will bring an improved team to Mercedes-Benz Stadium in 2020 to take on a strong SEC opponent in Georgia.”

The teams will battle for The Old Leather Helmet Trophy, one of college football’s iconic rivalry-game trophies. Traditionally, winners of The Old Leather Helmet don the helmet on the field after the game, starting with the head coach and then rotating from player to player as the team celebrates its victory.

Past and future Chick-fil-A Kickoff Game match-ups include:

ABOUT THE CHICK-FIL-A KICKOFF GAME
Created in 2008 by Peach Bowl, Inc., the Chick-fil-A Kickoff Game is a bowl-style, neutral-site game featuring two elite football programs and has been nationally televised on the first Saturday of the college football season since its inception. The game has hosted teams with national rankings of No. 1, No. 2, 5 (twice), 6, 7, 9, 14, 16, 18 (twice), 19, 22, 24 (twice) and 25 (twice). The Chick-fil-A Kickoff Game boasts an average attendance of 67,645, has been watched on television by 47.4 million viewers, and has distributed $51.9 million in total team payouts. For more information, visit www.Chick-fil-AKickoffGame.com.