Nick Chubb back to old self in Georgia's victory

Nick Chubb back to old self in Georgia’s victory 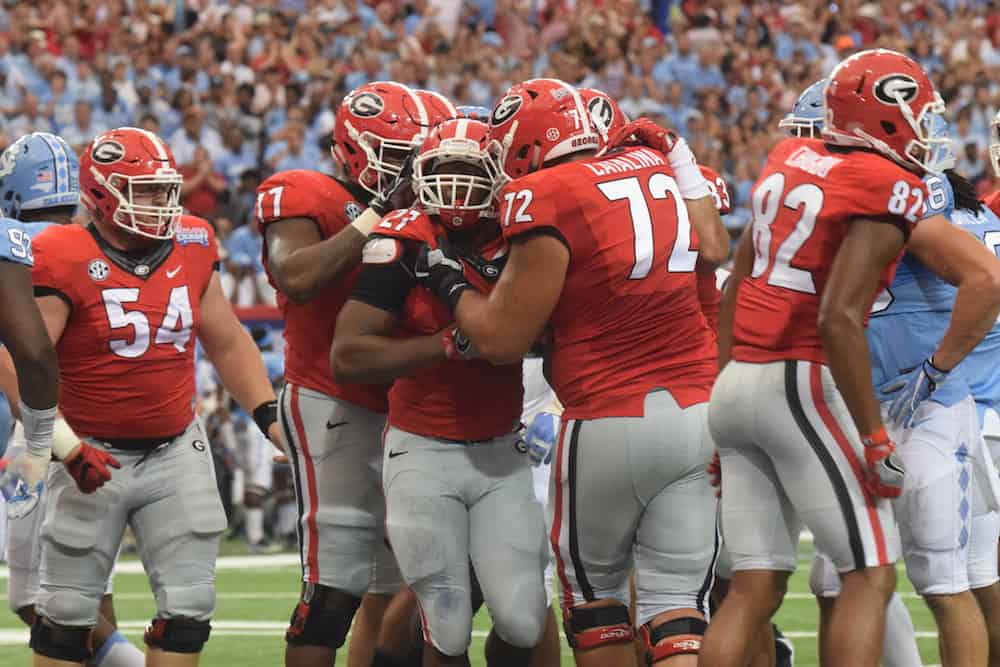 ATLANTA, GA – Entering Georgia’s season opener, there were many doubters as to how Nick Chubb would perform in his first game returning from a gruesome knee injury.

Needless to say, he proved those doubters wrong.

Chubb left the Georgia Dome on Saturday with a dazzling stat line, rushing for 222 yards and 2 touchdowns on 32 carries. From running over opposing defenders on inside runs to running past them on outside handoffs, he proved that he was back to where he was prior to October’s injury.

His heavy workload and shining performance was a large part of the Bulldogs 33-24 victory over North Carolina. And unsurprisingly, he was named the Chick-fil-A Kickoff Game MVP.

“Somebody asked me if he was on a pitch count. I guess not, huh?” head coach Kirby Smart said. “He did a great job.”

The star junior running back had one of the greatest performances of his career, as he finished with the second-highest total of yards in his career, falling only behind the 266-yard performance as a freshman against Louisville in the Belk Bowl.

As the performance displayed his true value as a player, Chubb went down the list in terms of crediting those who helped him bounce back throughout his recovery process. And for him, it seemed to be all about the correct mindset.

“Ten months ago I was injured,” Chubb said. “It was bad. Never been in that position. I was down, a lot of pain. I could have done two things, either laid down and never got up, or what I did, and pushed myself. I had a lot of support from everyone around me, and this game, I wasn’t out there by myself at all. There were all the other guys out there with me and allowed this type of performance. I’m just proud of everyone.”

Chubb said he felt relieved to be back on the field again after the long and grueling recovery. Georgia’s Smart had said on numerous occasions that Chubb had done everything asked of him, and we saw those efforts pay off.

Being back with his team in a game served as the last step of bouncing back from injury, and Chubb believes he gave his all for the team.

“We worked hard all season, and just to come back out there, for me, my first time out here back with my team, it felt amazing,” Chubb said. “And I took my mind off everything else. Just playing for my boys that I’ve been with for the past couple years.”

Chubb will continue to get a sizable workload throughout the season, but one would imagine that he would receive a lesser amount of carries and some rest in Georgia’s home opener against an FCS opponent, Nicholls State.