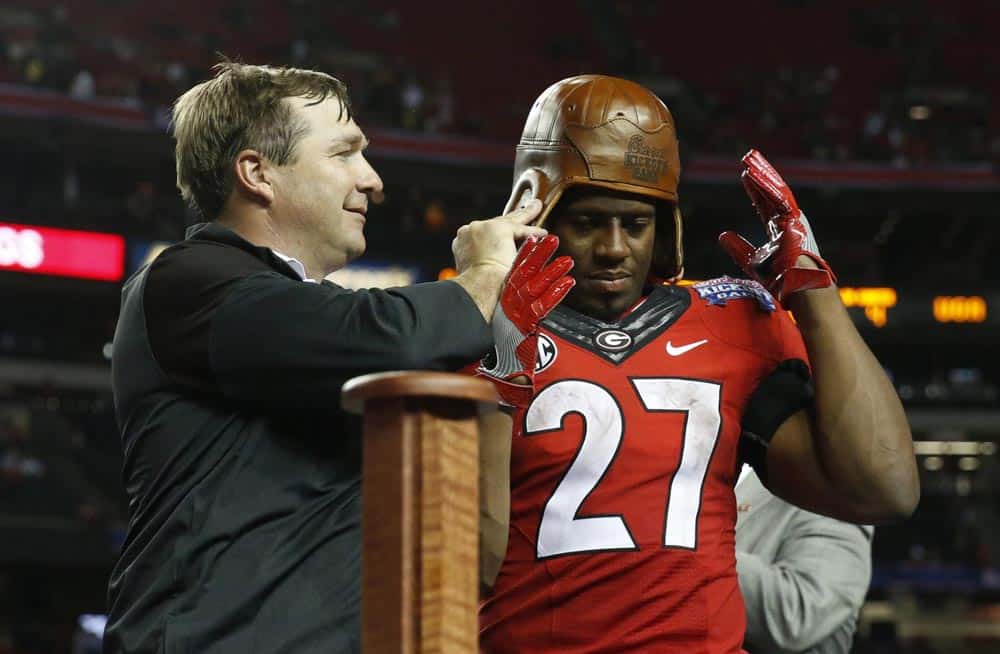 After a 33-24 win over nationally ranked North Carolina, Bulldogs fans’ must remember the old rule applies; you’re never as good or bad as you look in week 1. However, with that said, there are far more positives than negatives that should be taken from this game.

When you take into consideration the Bulldogs were breaking in a new coach, a new quarterback, missing a 1,000-yard rusher, and also holding their breath as their wounded warrior was set to return.

In the words of the great philosopher Ice Cube, today was a good day.

Takeaway One: Nick Chubb is back and once again the SEC’s best player

Injuries will always be a part of the game of football. In my years of covering sports, I have seen countless players injured. However, none bothered me more than the one I saw on October 10, 2015 at Neyland Stadium. It was the combination of watching one of the greatest running backs I had ever watched in conjunction with one of the finest human beings I have ever met have his career cut short by a gruesome knee injury.

For a moment, I forgot that young man who moments later would pass out from pain on the trainer’s table was Nick Chubb.

The bottom line is Chubb is not like you and I. There is something in his DNA that makes him able to push past human limitations. He never complained, he never asked why he just put together a recovery that made doctors shake their head in disbelief.

The fact is, as I stated over and over before his injury last season, Chubb is the most dominating player in the SEC. He was better than over-hyped Leonard Fournette or Heisman winner Derrick Henry.

Fast forward ten gruesome months of rehab later; he proved he is still the best running back in college football with 222 yards on 32 carries and two touchdowns against North Carolina. I can only speak for myself, but I will never take for granted watching the greatness of Nick Chubb again.

Takeaway two: Grayson Lambert is a great backup, now leave him there

This takeaway is not meant to be a slight to Lambert. His ability to take care of the football is one of the key reasons that the Bulldogs won 10-games last season. The Bulldogs are fortunate to have him on the roster, but it must now be as a backup.

The fact is that Jacob Eason is the future. He has all the tools to be a No. 1 NFL draft pick in three years. However, he has a learning curve ahead of him that must be attacked now. The Bulldogs might not have Chubb or Sony Michel back next season. That means the success of UGA will depend largely upon the shoulders of Eason.

Moreover, if Eason can’t handle the pressure, or has to miss time for any reason, you have a great backup who can come in and fill the gap.

One of the key contributors to the Bulldogs inability to get over the hump during the Mark Richt era was their special teams collapse at times. This game could have brought a similar result for the Bulldogs as special teams was a liability Saturday night.

The lasting memory will be when T.J. Logan took the 2nd half kickoff and went 95 yards to the house to put the Tar Heels up. However, William Ham also shanked a kick from 42-yards out, and Marshall Long posted an anemic 38.5 yards per punt.

While the Bulldogs were able to overcome special teams deficiency Saturday, they must improve if they want to challenge for the East and possibly the SEC championship.

Takeaway four: The defense was good but could become great

While there will be plenty of teaching points on the game film, the Bulldogs only allowed 17 points to a North Carolina offense that averaged 40.7 points per game last year. Yes, this is a new season and the Tar Heels have some new players, but it was a good start.

The sky is the limit for this Bulldogs’ defense. They also were breaking in several new starters and a new scheme. While there are similarities, there are many differences as well. With all of those variables in play, the defense deserves a solid A.

The defense also has three weeks to get better before they have to face their first explosive offense, Ole Miss.

Takeaway five: Isaiah McKenzie and Terry Godwin will be a nightmare match-up for opposing teams

Expectations were high for Terry Godwin coming into the 2016 season as he came on strong as a playmaker down the stretch of the 2015 season and capped it off with winning MVP of the TaxSlayer Bowl.

However, Isaiah McKenzie has proven after game one that he is more than just a punt returner. In fact, after McKenzie’s 122-yards receiving against North Carolina, he is only one yard short of his receiving total last season. Both players are going to be huge playmakers this season for the Bulldogs and are ideal fits for Jim Chaney’s offense.

Their ability to stretch the field, in combination with the right QB (see take away 2), will keep the defense from crowding the box to stop Chubb and Michel. If that happens, plan to watch the Bulldogs in Atlanta once again.