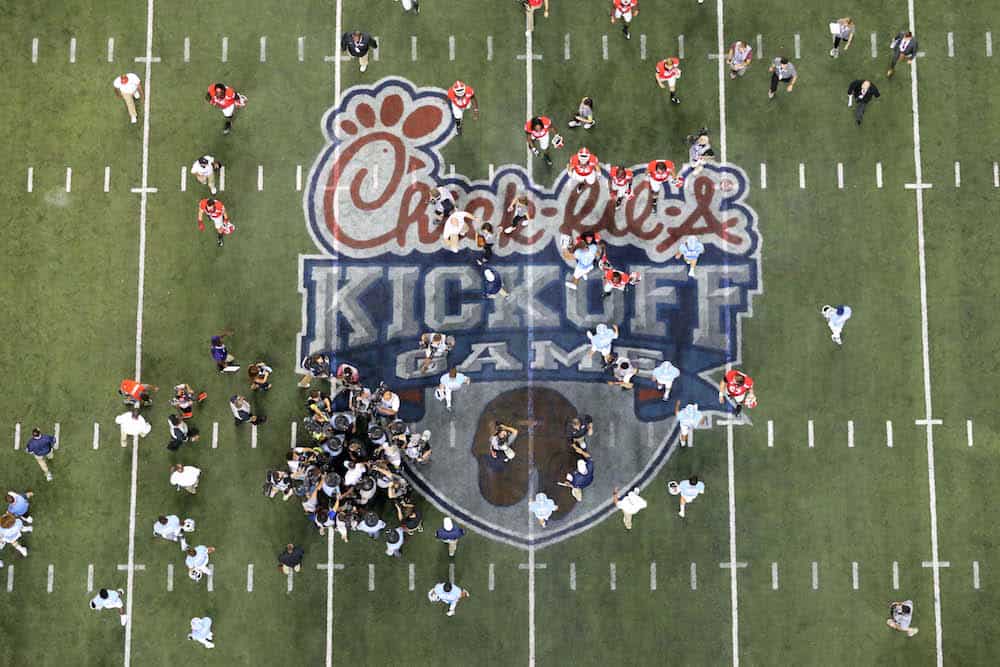 Georgia head coach Kirby Smart expressed his desire to play as a participant of the Chick-fil-A Kickoff Game more frequently after beating North Carolina 33-24 in his first appearance as a head coach, and he got his wish.

“It’s an unbelievable venue,” Smart said after the season-opening victory. “I’d love to come out every year and make it a home game.”

While he won’t get it every year, the Bulldogs will have another opportunity to appear in the nationally showcased game in the near future.

Georgia has been paired to play against the ACC’s Virginia Cavaliers on September 7, 2020 in the Labor Day game of the 2020 Chick-fil-A Kickoff Game series throughout the season-opening weekend at Mercedes-Benz Stadium in Atlanta, according to a contract obtained by Jason Butt of The Telegraph and macon.com.

Butt stated in his report that the contract has not yet been obtained by the University of Georgia, and will not be available for 90 days due to Georgia’s Open Records Act. However, athletic director Greg McGarity did release a statement on the program’s desire to appear in the event, similar to Smart’s statement.

“We are reviewing options for future schedules and yes, we would enjoy returning to (Atlanta) sometime in the next 4-5 years,” McGarity said.

In 2017, Chick-fil-A Peach Bowl will host a Saturday and a Monday game to open the season, with the series in 2017 beginning with Alabama and Florida State on Saturday, then Tennessee and Georgia Tech on Monday. Two games were hosted in the 2012 and 2014 seasons, and multiple games as a part of the Atlanta event will soon resume.

In 2020, the Saturday game will Florida State vs. West Virginia in an SEC/Big 12 matchup as reported by Brett McMurphy of ESPN in late July, followed by Georgia and Virginia on Monday.

Georgia has appeared in the event twice, losing to Boise State in 2011, and most recently beating North Carolina as previously mentioned. Virginia has never made an appearance in the game, but they were chosen for the 2020 game as the organization projects when programs will be in contention, and it is believed the Cavaliers will be to that point in four seasons under head coach Bronco Mendenhall.

Georgia leads the all-time series over Virginia 9-7-3 in 19 meetings, with Georgia winning the last meeting in 2000 in the Oahu Bowl in Honolulu, Hawaii by a tally of 37-14.

Georgia has not played on Labor Day since 1982, opening the season with a 13-7 victory over Clemson. The Bulldogs were able to turn around and beat Brigham Young 17-14 on a short week that season. Georgia isn’t accustomed to playing on short weeks, so it is unclear if the Bulldogs will schedule a bye week after the season opener. At this time, Georgia’s only other non-conference opponents scheduled for the 2020 season are East Tennessee State and Georgia Tech.

Additional stipulations in contract obtained by the University of Virginia: