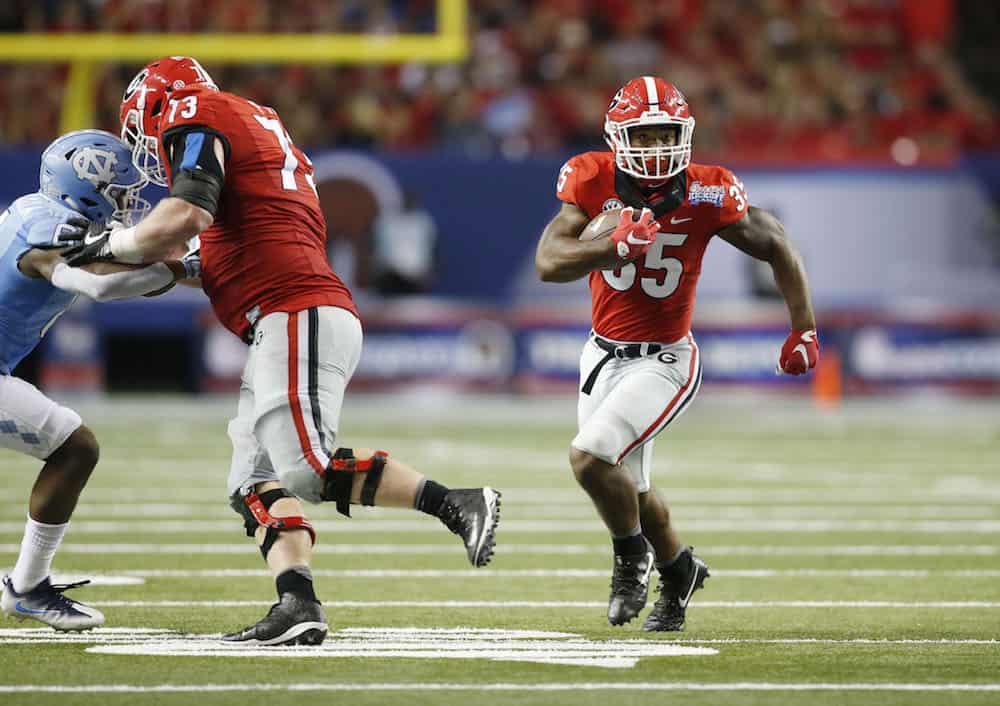 ATLANTA – Elijah Holyfield and Sony Michel were absent due to injury, and Brendan Douglas made a mistake. So Georgia called upon freshman Brian Herrien to play the backup running back role, and he shined when given the opportunity.

Herrien was given his first carry during the second quarter of Georgia’s 33-24 win over North Carolina, and took it straight to the end zone for a 19-yard touchdown. His quick impact helped Georgia on their way to victory, but it goes a level deeper for head coach Kirby Smart.

‘ll tell you what, tears almost came to my eyes when that kid had that touchdown run because a lot of y’all how don’t know how far he’s come,” Smart said. “He’s sitting in his second semester, he’s got to make four or five A’s to even be eligible. I had a great relationship with him from Alabama. We thought he was a really good player when I was over there, and I was like just hang on, don’t sign, just wait, we’ll be there for you if you can make your grades.

Herrien had to meet numerous goals in the classroom before he could give his pledge to Georgia, as he had to sign after he graduated in May, rather than in February on National Signing Day. It seemed as if it was to the delight of Herrien’s teammates and coaches to see him have success in his first collegiate game.

Davin Bellamy, Georgia’s junior outside linebacker, was asked to comment on Herrien and his efforts. He gave a listed Herrien’s various skills, and feels as if he has a true value to the team.

“He’s a strong guy, he’s a smart football player at such a young age,” Bellamy said. “Great instincts. He’s coachable. I can just keep going down the list. The guy has a bright future.”

Herrien finished the game with 59 rushing yards on seven carries.