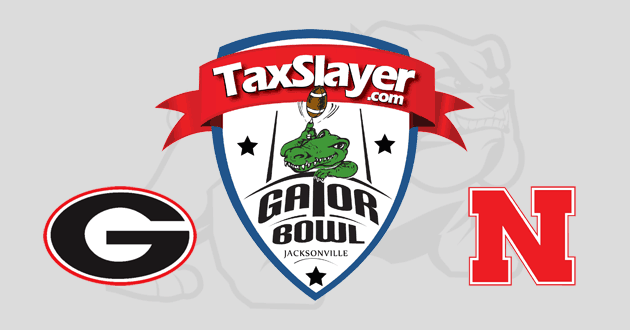 It’s almost time for Georgia and Nebraska to square off in the 2014 TaxSlayer.com Gator Bowl. Of course that sounds familiar as the two schools met just last season on Jan. 1, 2013 in the Capital One Bowl.

This year’s match-up takes place at Everbank Field in Jacksonville, Florida. It’s a venue that’s well known by Georgia players and fans after their annual trip there to play the rival Florida Gators.

Georgia has now played Nebraska twice in their history. The Bulldogs fell to the Cornhuskers 45-6 in the 1969 Sun Bowl in El Paso, but evened up the series with a 45-31 victory last season in the aforementioned Capital One Bowl.

The Bulldogs currently have a 27-18-3 record in bowls. This will be the Bulldogs’ 13th straight bowl appearance under Mark Richt and 17th consecutive overall.

Georgia comes into the game with a two game winning streak. After the miracle tip which gave Auburn a 43-38 win, the Bulldogs bounced back to beat Kentucky 59-17 and Georgia Tech 41-34 in two overtimes.

Nebraska sputters into the bowl game having lost their final regular-season game 38-17 to Iowa and two out of their last three.

This game will likely come down to which team is the most ready to play and which team wants it more. Georgia will be led by the 2014 QB starter Hutson Mason, who took over when Aaron Murray tore his ACL vs. Kentucky.

A healthy Todd Gurley will also pace the Georgia offense on the ground, while Mason will surely look to receivers Chris Conley and Michael Bennett.

One of the big questions will be the Georgia defense. Can they surrender less yards and points they they’ve been giving up this year? And how will the suspensions of Josh Harvey-Clemons and Sheldon Dawson affect the outcome?

Nebraska isn’t exactly an offensive juggernaut, so the Dawgs defense should be able to make some stops and keep them out of the end zone.

For an in-depth look at the game, check out Dr. SEC’s Preview & Predictions.