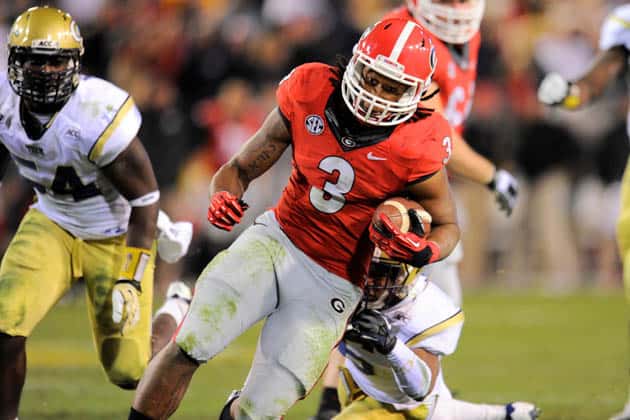 An exact calendar year after the Georgia Bulldogs defeated the Nebraska Cornhuskers 45-31 in the Capital One Bowl, the two traditional powers square off once again, this time in the TaxSlayer.com Gator Bowl.

Since their last game, the two teams have had more similarities than differences. Both teams got off to promising starts before their seasons were derailed with injuries. Now both teams will be looking for their ninth win of the season without their starting quarterback.

Nebraska’s Taylor Martinez has been shelved with a variety of ailments and has missed eight of the last nine games. Aaron Murray’s season was ended by a knee injury suffered vs. Kentucky on November 23. Despite the many disappointments, both teams can get a boost for the 2014 season with a win.

Why Nebraska can win this game

The Cornhuskers have been mediocre on offense most of the season. However, the Bulldogs are 80th in the nation in opponent points per game for a reason. Moreover, running back Ameer Abdullah has established himself as one of the top running backs in football despite little fanfare. He has rushed for 1,568 yards this season, and his two lowest outputs of the season were a 98-yard effort against UCLA and an 85-yard performance against Iowa.

Freshman quarterback Tommy Armstrong’s play has garnered mixed reviews. However, the extra weeks of practice before the bowl game should help settle him down. Also in his favor is that the Georgia secondary is also very young and has played erratic as well.

Nebraska’s defense is not going to strike fear into many opponents, but it will not have to face Murray, who had 427 yards and five touchdowns last season in the Capital One Bowl. Georgia’s new starting quarterback, Hutson Mason, looked very good in the second half of his first start against Georgia Tech in the Bulldogs’ final regular-season game, but this will be just his second career start.

Why Georgia can win this game

Mason will be starting just his second game, but he has several positive things trending his way. Firstly, he will have a healthy Todd Gurley. The rest was much-needed for college football’s most complete back, who has been slowed by nagging injuries.

Secondly, he will have the extra bowl practices to work with head coach Mark Richt and offensive coordinator Mike Bobo. There might not be a better combination to work with a quarterback in college football.

Thirdly, he will have a variety of weapons around him. This is not like when Joe Cox took over with very little NFL talent around him. This team, even with all the season-ending injuries, is very explosive. The recovery time will be crucial.

The defense should be positively affected with the extra practices and recovery time. This unit performed well under my expectations for them this season. However, the future is still bright, and they still have a great deal of young talent that is getting better with time.

Deciding factor of the game

This game will be decided by the composure that Mason plays with and how Bobo calls the game. Georgia shouldn’t shrink the playbook by much, and the coaching staff needs to just let Mason go play football. Mason is not a true freshman. He is one game away from being a fifth-year senior.

Trust him to make the needed plays, and it will open up the run game for explosive plays. This is exactly what happened in the second half of the Georgia Tech game when they finally took some of the reigns off.

If the Bulldogs trust Mason and he makes the plays, they will win the game. If they restrict him too much or he buckles under pressure, they will lose.

The Bulldogs and Nebraska will play the field position game early on. However, Gurley will make a couple of big plays in the running and passing game, and Georgia will take the lead into the fourth. At some point in the fourth quarter, the Bulldogs defense will make a play that seals the game.

RB Todd Gurley: For the first time since hurting his ankle during Georgia’s fourth game of the season against LSU, Gurley should be near 100 percent health-wise. Gurley is the most complete running back in college football and will be relied upon heavily once again in both the running and passing game. Despite missing three-and-a-half games this season with the ankle injury, Gurley has still produced 1,247 total yards and 15 touchdowns.

QB Hutson Mason: It has been known for some time that Mason was going to be the starter for the Bulldogs for the 2014 season. However, when Aaron Murray, the SEC’s most statistically prolific passer in conference history, went down with an ACL injury, Mason was thrust into the spotlight. He got his first career start against Georgia Tech in the Bulldogs’ season finale. The redshirt junior got off to a slow start but finished strong, completing 22 of 36 passes for 299 yards and two touchdowns, while leading the Bulldogs back from a 20-point deficit.

LB Ramik Wilson: Wilson was one of the key players the Bulldogs were counting on this season to help replace last season’s linebacking corps that was one of the most talented units in UGA history. The task was not going to be easy with the departure of names like Jarvis Jones and Alec Ogletree. Although the Bulldogs were unable to do it as a unit, Wilson did his part and enters the Gator Bowl against Nebraska with a league leading 128 tackles. The All-SEC selection will need to be on the top of his game against Nebraska.

LB Leonard Floyd: Todd Grantham’s 2013 unit will not be remembered as his best. However, the young Bulldog defense could become one of the nation’s best over the next few seasons. However, UGA still has one more game this season, and the Bulldogs will need their best pass-rusher, freshman star Leonard Floyd, to have a big game. He has led Georgia with 6.5 sacks and finished the year with 8.5 tackles for loss and 47 total tackles. With freshman quarterback Tommy Armstrong starting for Nebraska, Floyd will need to channel his inner Jarvis Jones.

WR Chris Conley: With the depth the Bulldogs have, this could be any of their wide receivers. However, with the game Conley had last season against the Cornhuskers, he has to be the leading candidate. Conley had two receptions for 136 yards, and both catches resulted in touchdowns. If the Bulldogs can make a few big plays in the passing game, Gurley will take care of the rest.

RB Ameer Abdullah: Georgia’s Todd Gurley will receive most of the pregame hype, but Abdullah has been one of the most productive running backs in college football. The Associated Press All-American topped the 100-yard mark 10 times this year. Moreover, the Cornhuskers have produced some of the top rushing offenses in college football history, and Abdullah became just the fifth player in school history to hit the 1,500-yard rushing mark at Nebraska. A mediocre game will surely mean a Cornhuskers defeat.

QB Tommy Armstrong: Nebraska starting quarterback Taylor Martinez got sidelined for eight games this season with a toe injury. As a result, highly touted redshirt freshman Tommy Armstrong got an opportunity, and he has made the most out of it. He has thrown for 803 yards and ran for an additional 176. He also delivered a signature drive on a big stage in Nebraska’s 17-13 win at Michigan. It has not all been smooth sailing for Armstrong, however. He has only completed 53 percent of his passes and has thrown as many interceptions (7) as touchdowns.

SS Corey Cooper: The Cornhuskers have experienced a dramatic turnaround on the defensive side of the football over the second half of the season, and Corey Cooper is one of the main reasons why. Cooper has been rock solid at the safety position and is the team’s leading tackler entering the bowl game with 81 total tackles. The Bulldogs are extremely balanced when healthy, and Cooper will need to have an impact in the running game and the passing game.

DE Randy Gregory: The Huskers need to put pressure on Georgia quarterback Hutson Mason early and often. The good news for Nebraska fans is that they have one of the nation’s top pass-rushers. Gregory is leading the conference in sacks (9.5) and ranking
among the league leaders in tackles for loss (17). Moreover, he is improving every week. He has had at least one sack in six of the season’s final seven games and had at least one tackle for loss in each of the final 11 games.

CB Ciante Evans: The Cornhuskers cannot win the second edition of this game if they don’t do a better job defending the pass this time around. Much of the pressure will fall on the shoulders of Ciante Evans. He is currently tied for the team lead with four interceptions. He also has five pass break-ups and 44 total tackles this season. Even though two of their top wide receivers are out for the season, the Bulldogs are still loaded at wide receiver and love to go three- and four-wide on offense.