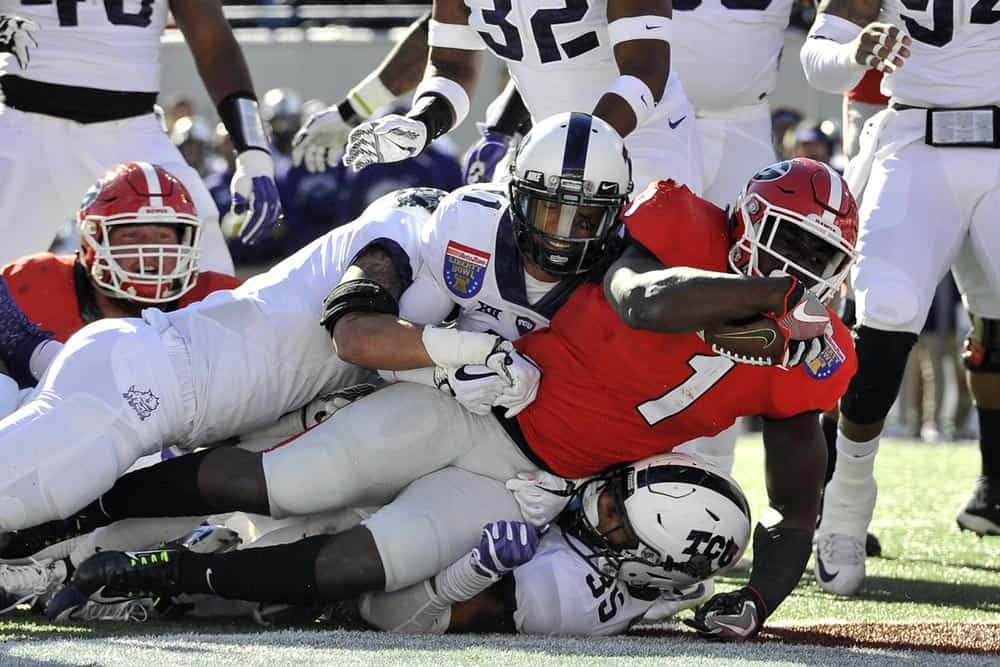 MEMPHIS, Tenn. – The Georgia Bulldogs (8-5) grabbed the school’s 30th all-time bowl victory in a 31-23 win over the TCU Horned Frogs (6-7) Friday afternoon in the Autozone Liberty Bowl at the Liberty Bowl Memorial Stadium in Memphis.

Georgia junior tailbacks Nick Chubb and Sony Michel combined for 268 total yards and three touchdowns. Chubb amassed 142 yards on the ground including a 13-yard touchdown run that strengthened the Bulldogs’ lead to eight points at 31-23 with 2:48 left in the game. The lead proved to be enough as the Georgia defense staved off the Horned Frogs last attack to secure the win. The Bulldogs outscored the Horned Frogs 10-0 in the fourth quarter. Michel, the Liberty Bowl Offensive MVP, supplied the Bulldogs with one rushing touchdown on 87 yards and a receiving score on 39 receiving yards.

“We just kept pounding the rock,” said Georgia head coach Kirby Smart. “The guys just kept believing in what we were doing. Defensively they played hard and had some big stops. We were moving up front and giving different formations. We got some perimeter blocking and those two backs are special kids. I’m proud of this team. This means a lot for this Georgia program.”

Freshman quarterback Jacob Eason threw for 164 yards and a touchdown. Junior wideout Isaiah McKenzie led all Georgia receivers with four catches and 103 yards including a 77-yard catch and run that set up Michel’s first score. The throw and catch registered as career-longs for Eason and McKenzie.

The Bulldogs got on the scoreboard first with a 3-yard Michel touchdown run on their second drive of the game. Then to close out the first quarter on a 3rd-and-13 from the Horned Frogs’ 33-yard line, Michel caught a pass out of the backfield, fought off multiple defenders and tumbled into the end zone. In the first half, TCU connected on a 40-yard field goal, while quarterback Kenny Hill ran and threw for 10-yard touchdowns.

At halftime, the Bulldogs trailed the Horned Frogs 14-16, but Georgia’s Carter forced his second fumble of the game on TCU’s opening possession of the second half. The Bulldogs then orchestrated a 12-play, 52-yard drive that included a fake field goal and concluded on a 6-yard Javon Wims touchdown reception to take their first lead of the game at 21-16.

In the subsequent possession, the Horned Frogs regained the lead, 23-21, at the 2:07 mark in the third quarter on a 9-yard touchdown reception by John Diarse, his second of the game. However, Georgia quickly went back on top, 24-23, with a 30-yard field goal by Rodrigo Blankenship in the opening minutes of the fourth quarter.

Georgia erased a little over five minutes on the clock in its 9-play, 70-yard drive that Chubb capped off with the lead-strengthening touchdown in the final minutes.

*MVP Thompson Record-Setting Day: Sophomore DT Trenton Thompson, named the overall MVP today, set a Liberty Bowl record and tied a Georgia bowl record with three sacks today, and he finished with eight tackles and 3.5 TFL. He shares the sack mark with David Pollack (2005 Outback Bowl) and Marcus Howard (2008 Sugar Bowl). The second sack was for a loss of seven yards and moved TCU back to the 24 and the drive ended with a missed field goal as TCU held a 16-7 lead at that point. The third sack of the game resulted in a loss of 10 and led to another missed field goal as Georgia was up 24-23 midway through the fourth quarter. Georgia responded with a nine-play, 70-yard TD drive in 5:09 for a 31-23 lead with 2:48 left in the contest. Georgia’s five sacks today matched its season high also getting that in a win over USC. Senior Reggie Davis set a bowl record with five kickoff returns for 76 yards. The old mark was four KOR held by a trio of Bulldogs.

*Bowl Streak: The Bulldogs made their 52nd overall and 20th consecutive appearance in a bowl game today. Georgia’s bowl record is now 30-19-3. Currently, 30 bowl wins and 20 straight bowl outings rank third nationally. The Bulldogs are now 2-2 all-time in the Liberty Bowl. With today’s 31-23 win over TCU, the Bulldog seniors cap their career with a 36-16 record including 3-1 in bowl games. The Bulldogs are 4-0 all-time versus the Horned Frogs.

*Chubb Headlines Ground Game: Junior Nick Chubb moved up to second place all-time for career rushing yards by a Bulldog now with 3,424, trailing only the legendary Herschel Walker (5,259 yards in three years). Today, he had 142 yards on 17 carries to give him 1,130 yards for the season. It was his second 1,000-yard season and 19th game with at least 100 yards rushing.

*Torrent Of Tackles For Smith: Sophomore Roquan Smith led the team and matched his career-high with 13 tackles today, and it was his 3rd game of 10+ tackles. He finished the year as Georgia’s leading tackler with 95. He is the first sophomore to lead UGA in tackles since 2008 when Rennie Curran had 115.

A Look At the Offense Today: Georgia ran 65 plays for 412 yards. Freshman QB Jacob Eason was 12-for-21 for 164 yards and 2 TDs. After Georgia’s ground attack was limited to 49 yards on 18 carries in the first half, the Bulldogs wound up with 248 yards on 44 carries. Juniors Nick Chubb (17-for-142 yards) and Sony Michel (15-for-87 yards) led the ground game. Junior Isaiah McKenzie had his third career game of at least 100 yards receiving today. He led the team with four catches for 103 yards. Also, he had three rushing yards and one punt return yard for 107 total yards. A career-long 77-yard pass by freshman QB Jacob Eason to McKenzie helped spark a five-play, 86-yard TD drive for a 7-0 lead over TCU with 9:32 in the first quarter. The 77-yarder was the longest passing play that did not result in a TD in Liberty Bowl history. Georgia’s second TD of the day was a 33-yard completion from Eason to Michel.

*For Starters: Senior SE Kenneth Towns made his second career start while sophomore ILB Natrez Patrick returned to his starting spot after missing the past three games due to injury. Junior Isaiah Wynn got the nod at left tackle after graduate Tyler Catalina had started 12 games this year. Wynn made 11 starts at left guard this year too.

*Points Off Turnovers: Georgia is +8 in Turnover Margin for the year. The Bulldogs have forced 27 turnovers and turned them into 57 points. Opponents have scored 72 points off 19 Bulldogs miscues. Georgia got a fumble recovery with 30 seconds left in the first half as Aaron Davis recovered it at the UGA 48 after a sack and strip by Lorenzo Carter. It led to a missed field goal of 53 yards. TCU scored six points off one Georgia miscue. In the first quarter, Jacob Eason was sacked and fumbled on the play by TCU’s Tipa Galeai who recovered it at the UGA 21. It led to a TD and a 9-7 advantage after a missed PAT. In the second half opening drive, junior Dominick Sanders recovered a fumble caused by Carter and it gave Georgia the football at the UGA 48. It led to a TD as Javon Wims caught a four-yarder from Eason and with the PAT it gave the Bulldogs a 21-16 edge with 7:08 left.

*Last Time A Fake FG: Midway in the third quarter, Georgia executed a successful fake field goal as Brice Ramsey scampered for 11 yards on a 4th and 6 from the TCU 21 to extend a drive that eventually resulted in a go-ahead TD and 21-16 lead. Prior to that, Georgia’s last successful fake field goal play was against Ga. Tech in 2014 when PK Marshall Morgan rushed 28 yards for a first down.

Opening Statement…
“First, I’d like to give a special thank you to the Liberty Bowl, and the people here in Memphis have been so welcoming to us and it was a great bowl game for us. I also want to thank our seniors for the hard work they’ve done. Many of these guys have prepared over the last month and really did a great job. It was a total team effort. We had ups and downs in the game, swings in momentum, a lot of things rolling in that game. I have a lot of respect for Gary Patterson and the TCU program. They’ve always done good things and will continue to do that. But I’m proud of these young men on our team. They do not quit. They keep working, working and working, and they never stop. They don’t look at the scoreboard, which is what we ask them to do, and that turned out well for them today.”

On the difference between being stubborn and being committed to the run…
“It’s a fine line. Sometimes you have to do things offensively you don’t want to do, but have to do. You look at those rushing stats, and it says rushing for UGA 248, rushing for TCU 175. I’m a big believer in running the ball to win the game. At the end of the day when we had to run the ball, we did. That’s a mark of two good backs (Nick Chubb and Sony Michel) and that’s the mark of some tough guys up front. Certainly we struggled with that early in the game, but give credit to these backs, Coach Chaney and the offensive line.”

On this win creating momentum going into next season with so many guys returning…
“I think it does a lot for us. I really believe that, whether we won or lost today’s game, this program is heading in the right direction. It certainly helps tremendously for us recruiting and momentum-wise to have won the game. That good feeling that it doesn’t matter whether you got seven wins, 11 wins, 13 wins, there’s no elevator on a mountain. You got to climb, you got to work, and that’s what this team is going to do. They’ve done that all year, they’ve fought and they’ll continue to do that. It certainly helps that 8-5 is better than 7-6, but neither one is where we want to be and we acknowledge that. We know we have to have a better offseason, and a large portion of our team is coming back. We got some young players that probably started reading some of the press clippings that didn’t play real well today and they’ve got to understand that it’s every day you got to come to work.”

“Our seniors have been very committed to this team throughout the whole season. I know some other teams probably have some seniors that are ready to go on to the next level and ready to continue with life, but our seniors have stuck in there. Throughout practice, they came out here and fought hard with us even though we went through adversity.”

“I think I practiced pretty well. I went in with the mindset that you have to stick with it and listen to the coaches. Overall, we played some good defense today.”

“No matter who you play, it’s always hard. We played a good game. Everyone was fresh, everyone was motivated even though we struggled and kept going 3-and-out, and everything was tough. But, we never stopped. No one on the offense stopped, no one on the team stopped. We just kept pounding and trusting and believing in what we do.”