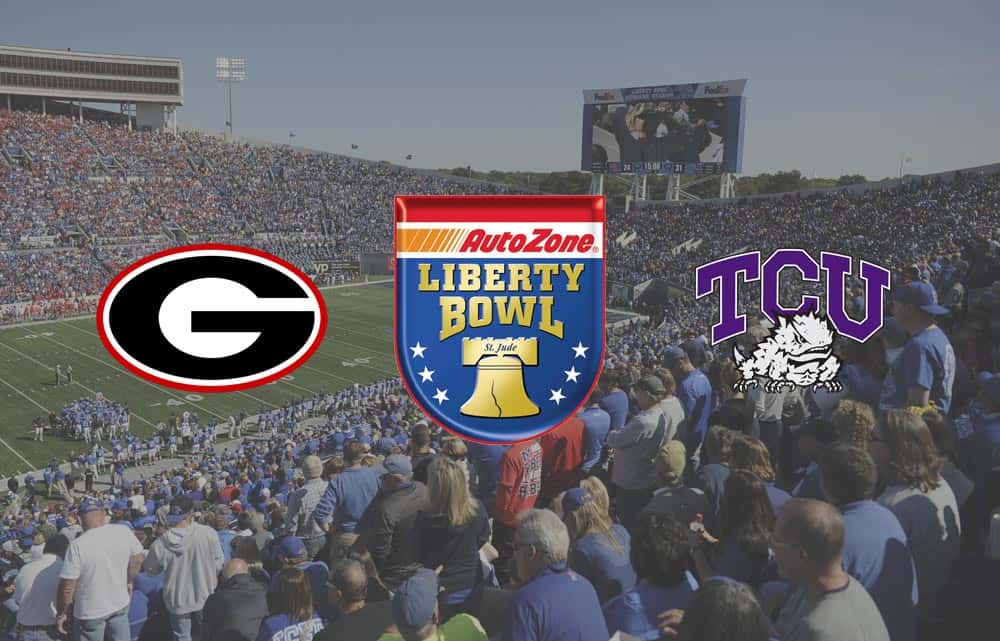 The Georgia Bulldogs will face the TCU Horned Frogs in the 2016 AutoZone Liberty Bowl in Memphis, it was announced on Sunday.

The AutoZone Liberty Bowl pits the Big 12 against the SEC at Liberty Bowl Memorial Stadium in Memphis, Tennessee. The game is set for Friday, Dec. 30 and will be televised by ESPN at Noon ET.

Georgia and TCU first met on the gridiron in the 1942 Orange Bowl and have played a total of three times. The Bulldogs won the most recent meeting 38-10 in Athens in 1988 to extend their series lead to 3-0.

UGA will be making their 52nd appearance in a bowl game and first in the Liberty Bowl since falling to UCF 10-6 in 2010.

The Bulldogs currently have a 29-19-3 record in bowls. This will be the Bulldogs’ first bowl appearance under Kirby Smart and their 20th consecutive appearance overall.

“We look forward to representing the SEC in the AutoZone Liberty Bowl in Memphis and competing against TCU,” said UGA J. Reid Parker Director of Athletics Greg McGarity. “Rarely do we face an opponent from the Big 12, and we look forward to this matchup. Steve (Ehrhart), his staff and volunteers will take great care of our team, administrative staff and Bulldog fans.”

“The opportunity to play an outstanding team in TCU is an exciting challenge for our coaches and players,” said UGA head coach Kirby Smart. “This will be my first trip to the game as a player or coach but the Liberty Bowl has a long history of providing a quality bowl experience that I’m sure our players and fans will enjoy. We will face a quality Big 12 opponent in TCU and I’m sure Coach Patterson will have them at their best on December 30. We are anxious to begin practice and preparations for the trip to Memphis.”