Georgia is one of nine teams that were selected to sport the 2011 Nike Pro Combat uniform. The others are Army, Boise State, LSU, Michigan State, Navy, Ohio State, Oregon and Stanford.

“Nike takes pride in giving athletes an advantage by providing them with cutting edge innovation. The Nike Pro Combat system of dress uniform delivers unparalleled on-field performance benefits while inspiring the team through each uniform’s unique design,” said Todd Van Horne, Nike’s Creative Director for Football. “It is a privilege to collaborate with the coaches and student-athletes to develop a look that’s truly distinctive to each university and their teams.”

I’m not one for uniform “gimmicks” as displayed in 2009 against Florida. Black helmets that look like Grambling? No thanks.

This isn’t a gimmick, but more of a marketing ploy by Nike. They have stiff competition in this arena now from Adidas and Under Armour, so they want to stay on top by creating hype.

There’s also the little fact that Georgia has a contract with Nike for their uniforms and fan gear. The Bulldogs are probably obligated to wear these uniforms at some point.

Now lets get to the actual uniforms. Nobody knows for sure what they look like, but the UGA players were shown the Pro Combat gear yesterday and loved them (based on their Twitter responses). The uniforms will likely be shown to the public at Picture Day on August 20.

Back in March, From Hedges To Hardwood (FH2H) heard some chatter about possible new uniforms for the Boise State game. You can also read their story from yesterday on the Pro Combat Uniforms.

FH2H uncovered two pictures (No. 1 and 2) which may or may not be the actual uniforms the Dawgs will wear. I prefer the one on the left.

Saturday Down South has also found a picture on a message board of yet another Nike Pro Combat concept for the Dawgs (No. 3). Not liking the helmet at all. What do ya’ll think of these concepts? 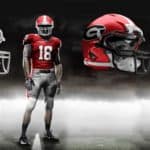 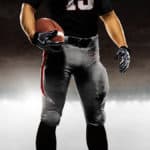 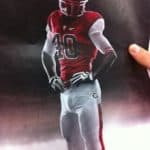 Update 2: From the AJC – McGarity, who has seen the uniforms and “approved it months ago,” declined a request to describe the new look verbally. But he did take the opportunity to calm the nerves of UGA purists who might be unsettled by anything other than traditional bright-red helmets with a black Georgia G. “The Georgia G is preserved in its rightly spot,” McGarity assured. The Georgia G is still as prominent as it has always been and is as it always will be. We’re not messing with the ‘G,’ OK? It’s school colors and all that stuff.”

Update 3: Pic 3 is either a fake or last year’s version of the Pro Combat Uniform. It was rumored to be worn for the 2010 Florida game.