The University of Georgia received 53,522 tickets for the upcoming Chick-fil-A College Kickoff against Boise State, Sicemdawgs.com has learned after obtaining a copy of the game contract.

Boise State received 7,500 tickets while Peach Bowl, Inc. received 993 tickets. The Georgia Dome seats 71,228 for football, so that leaves 9,213 tickets that will likely go to sponsors, Chick-fil-A Bowl renewal buyers and other sources. Listed below is a breakdown of the tickets for the Bulldogs and Broncos:

The image below depicts the seating locations for both Georgia and Boise State. Click on the image to view the larger version: 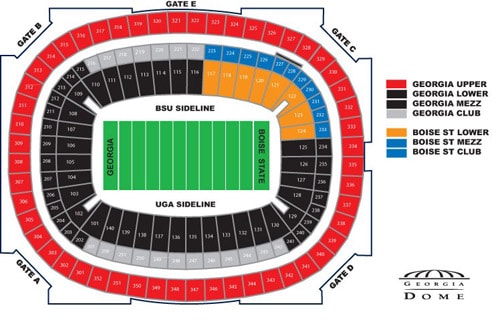 As you can see, the Bulldogs have the majority of the lower level and the entire upper level. Student ticket locations are to be determined. The contract stipulates that UGA will receive their ticket allotment no later than the first week of July.

Other details from the contract:

The game will be nationally televised by ESPN on Saturday, September 3 at 8:00 p.m. ET.