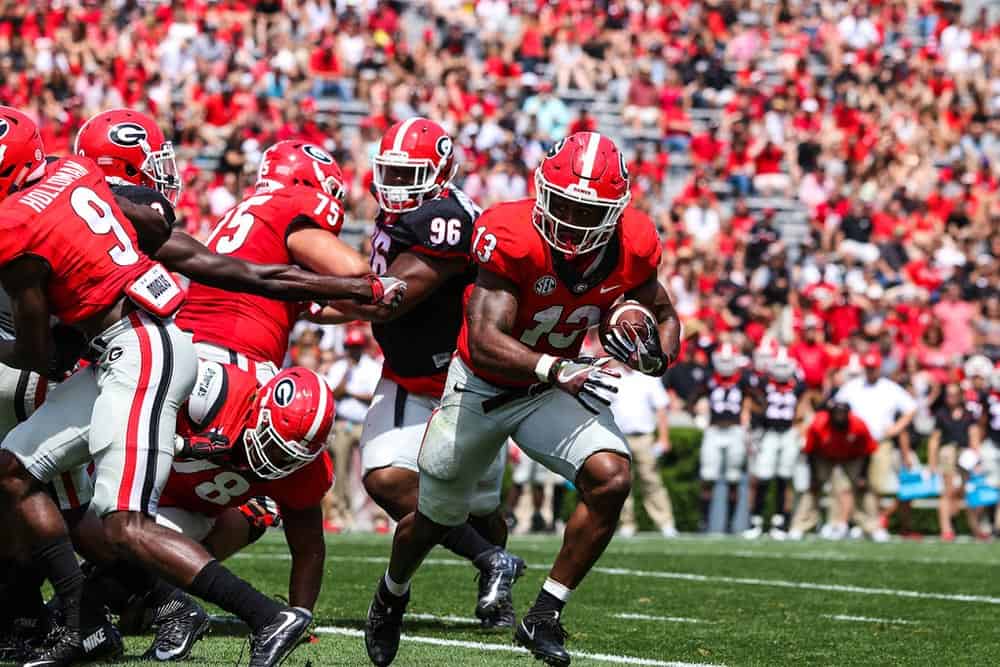 ATHENS, Ga. – Team Red defeated Team Black by a 25-22 score in front of 66,133 fans at Sanford Stadium in the University of Georgia’s annual G-Day football game to close out spring practice on Saturday afternoon.

A late nine-play drive for the Red team, led by quarterback Jake Fromm, was capped by the decisive 28-yard field goal from Rodrigo Blankenship with just 1:03 remaining in the game to seal the victory for the Red squad.

Fromm finished the game 14-for-23 through the air for 277 yards and two touchdowns. Jacob Eason, the signal-caller for Team Black, went 16-for-36 for 311 yards and two scores. Prather Hudson recorded a game-high 45 yards on the ground, followed closely by Elijah Holyfield and his 41 yards plus a score. Terry Godwin was the game’s leading receiver with 130 yards through the air while Tyler Simmons led the Red squad with 114 receiving yards and a touchdown.

“I’m really excited about our fan base, to have 66,000 people (at G-Day) makes me proud to be a Bulldog.” said Georgia head football coach Kirby Smart. “I know our kids certainly appreciated it and I wanted to thank our fans for that… Overall I was pleased with today. I’m excited about the growth of our team. We saw some players get better throughout the entire spring, so I’m certainly excited for that.”

After a scoreless first quarter, the Black squad opened the second frame with fireworks as Eason connected with Javon Wims for a 47-yard pass to reach the Red seven-yard line. Three plays later, Blankenship split the uprights from 19 yards out to give Black a 3-0 lead and finish off a 15-play, 91-yard drive.

The Red offense countered with touchdowns on its next two drives, cashing in on a 42-yard pass from Fromm to Jeremiah Holloman then a three-yard scamper by Holyfield for its second score to take a 14-3 lead with four minutes remaining in the first half, a lead that was cut to 14-6 on a Blankenship 33-yard field goal at the end of the half.

After a quiet start to the third quarter, Eason once again flashed his arm late in the frame, connecting with Jayson Stanley for a 33-yard strike to reduce the Black’s deficit to 14-13 with 1:30 remaining.

Black claimed the lead with 5:28 remaining in the contest as Blankenship nailed his third field goal of the day from 34 yards out to take a 16-14 lead. After the ensuing kickoff, Fromm connected with Tyler Simmons for a 76-yard quick strike, followed by a two-point conversion on a pass to Holloman, to regain a 22-16 edge in just nine seconds.

The teams then traded scores, with Eason hitting fellow sophomore Charlie Woerner for the tying score on a 36-yard catch-and-run to knot the game at 22 before Fromm led Red to the decisive lead with a nine-play drive capped by a Blankenship 28-yard field goal to give Red a 25-22 win.

‘’I’m really excited about our fan base. We had 66,000 people. It makes me proud to be a Bulldog. I’m glad they came out. A lot of recruits made comments about the attendance, and I think any chance you get to have 66,000 people for a practice, that’s an exciting thing. The kids certainly appreciated it. I want to thank the fans for that. I thought we had a great atmosphere.

‘’When it comes to the game, the battle in between, it started out kinda slow. When the clock goes as fast as it does, it seems like the first quarter is over and there’s no score. When the scoring started, it started fast and there were some explosive plays, which anytime you get a chance to do that, it’s good, especially for your offense. Obviously, we didn’t run the ball like you want to, but to be honest with you, it wasn’t part of the game plan. We wanted to see if we could throw the ball some, move the ball around. We would have like to run it
better with the One offense, which we didn’t do, which we have to improve on. But there were some challenges. We limited the coordinators, we limited the offense with those opportunities. But the best thing that happened was that you got an opportunity to see quarterbacks try to work the 2-minute drill. So many of our games come down to critical situations, where it’s using time outs, opportunities to win the game. That excited me, and I thought the defense really played hard. Didn’t always tackle well and got some balls thrown over our heads, but they really competed and challenged each other more than maybe we had done earlier in the spring. So overall, I was pleased with the day, excited about the growth of our team. I really saw some players
getting better throughout the entire spring.’’

I thought we played together as a team really well all spring. We communicated well. To the young guys, the message is to hang in there. It will be hard at first, but you should always play your hardest. You’re gonna mess up, but you’ll get your chance. (On the quarterback competition) I think they both came out today, played hard and competed and that’s all we ask. You never know what will happen. Jacob was the quarterback last year, but if Jake comes back in the fall and plays well I think it will be open for either one of them. (On younger Res). Those guys (Herrien and Holyfield) are extremely talented. They run the ball extremely hard every time.’’

On the competitiveness of the scrimmage…
“I didn’t expect anything other than a very intense hard fought game between the two teams. Throughout the whole spring we’ve been competing with each other battling going hard at each other. We respect each other for it because we get each other better and that’s the whole goal of spring ball.”

On spring practice…
“We had a pretty good spring. Everyone came out and did what they needed to do, we had a lot of guys working really hard, we really had some consistency this spring so that’s always good to see moving toward the season.”

On individual performance and working together as a unit…
“I feel like I played well and so did all of my teammates. We’re one unit and that’s what we stressed this spring is playing as a unit and clicking on all cylinders and I feel like we executed today and did a really good job of that.”