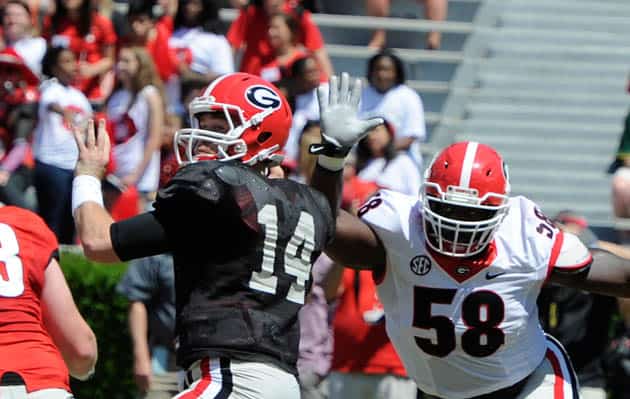 ATHENS, Ga. – Quarterback Hutson Mason passed for 241 yards and a touchdown to lead the Red team to a 27-24 victory over the Black squad in the G-Day Game on Saturday.

“It was a great day for Georgia period,” Bulldogs coach Mark Richt said. “I thought the guys played hard. The quarterbacks made a lot of good throws and good reads, the run game was decent and the protection overall was good. Defensively, we knew were not going to show too much in a game like this. The big thing is for everything to understand what to expect on a daily basis in terms of things like hustle and communication. We’ve got a ways to go, and the players and coaches know that. It’s a work in progress.”

“Hutson continued to show that he knows what to do,” Richt said. “He was poised and he was in total control of what was going on.”

Receiver Chris Conley paced the Red team with six catches for 124 yards, including a 53-yarder from Mason.

Tailback Brendan Douglas led the Red team with 40 yards and a touchdown. Tailback Todd Gurley had 32 yards and a score.

Tailback A.J. Turman scored two touchdowns for the Black squad, one rushing and one receiving. Receiver Clay Johnson had five catches for 75 yards.

The Red team struck first as kicker Marshall Morgan drilled a 34-yard field goal for a 3-0 lead at the 1:53 mark of the first quarter.

The Black squad responded with a 1-yard touchdown run by Turman. Kicker Patrick Beless tacked on the PAT for a 7-3 edge.

The Red then scored the next two touchdowns. Receiver Reggie Davis hauled in a 10-yard pass from Mason and Gurley posted a 2-yard run. Morgan had each PAT, giving the Red a 17-7 lead at halftime.

Kicker Thomas Pritchard pulled the Black team to within 17-10 as he converted on a 29 field goal with 47 seconds left in the third quarter.

At the 11:03 mark of the fourth quarter, Red tailback Brendan Douglas powered in from a yard out. Morgan’s extra point made it 24-10.

The Black squad got it to 24-17 when quarterback Faton Bauta hit receiver Uriah LeMay on a 41-yard touchdown pass with 4:52 remaining. Beless converted the PAT.

The final score of the day came when Bauta threw a 4-yard pass to Turman with 42 seconds left. Pritchard added the extra point for a final score of 27-24.

The Bulldogs will open the 2014 season Aug, 30 against Clemson.