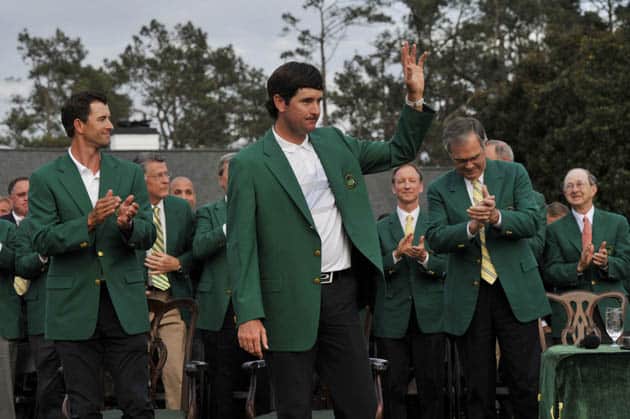 Watson shot a final-round 3-under-par 69 and finished the tournament at 8-under. He held off Justin Spieth (-5), who was playing in his first ever Masters, and Jonas Blixt (-5).

“I was telling my caddie coming up 18 ‘I don’t remember the last few holes,” Watson told Jim Nantz of CBS. “I just remember hanging on.’ Walking up 18 was a little bit easier this time.”

In his first round on Thursday, Watson shot a 3-under 69 and was tied for second with Adam Scott and Louis Oosthuizen. Then on Saturday, Bubba made his move with a 4-under par 68 to take a three-shot lead into the weekend.

Watson didn’t fare as well on Saturday, shooting a 2-over par 74. But it was good enough to place him in the final pairing on Sunday with Jordan Spieth.

Bubba Watson claimed not only the Masters title and the Green Jacket, he walked away with a tournament record $1.62 million.

Two other former Georgia Bulldog golfers also fared well in the 2014 Masters. Chris Kirk tied for 20th and Russell Henley tied for 31st. Kirk will take home $101,160 in prize money, while Henley gets $55,800.