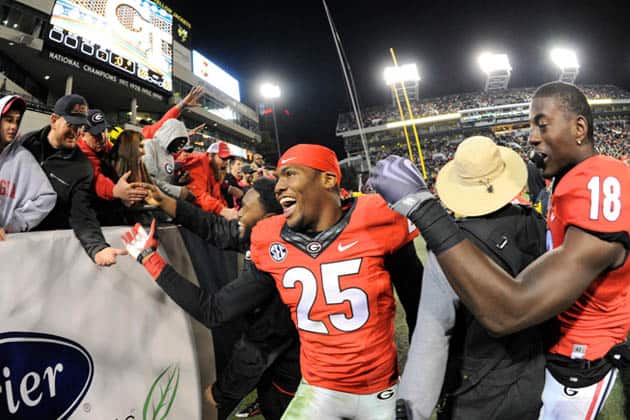 UGA defensive back Josh Harvey-Clemons has been dismissed from the team, head coach Mark Richt announced today in a statement.

A reason for the dismissal wasn’t specified in Georgia’s two line release:

University of Georgia junior defensive back Josh Harvey-Clemons has been dismissed from the team for violation of team rules according to an announcement Tuesday from UGA head coach Mark Richt.

Harvey-Clemons played in 25 games during his career including 11 starts.

Harvey-Clemons had been suspended for the first three games of the 2014 season, reportedly due to his second marijuana infraction. He also missed the Gator Bowl game vs. Nebraska and the 2013 season opener at Clemson, both due to suspensions.

A 5-star recruit, Harvey-Clemons signed with the Georgia Bulldogs in February 2012 out of Lowndes High School in Valdosta.

As a sophomore, he was third on the team with 66 tackles. He also had one interception and three fumble recoveries.

Besides his frequent suspensions and now dismissal, Josh Harvey-Clemons will also be long-remembered for one crucial play — the tipped pass from Nick Marshall to Ricardo Louis that resulted in a 73-yard touchdown and 43-38 loss to Auburn.

With Harvey-Clemons now off the team, the Bulldogs secondary is left with cornerbacks Shaq Wiggins, Damian Swann, and Brendan Langley and safeties Corey Moore, Tray Matthews and Quincy Mauger.

Mark Richt has lost control of his birthday. #JHC