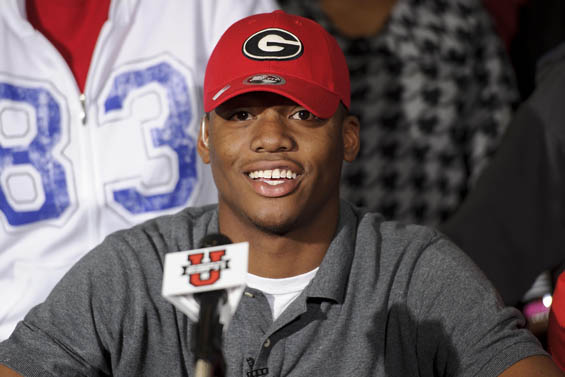 UGA sophomore safety Josh Harvey-Clemons faces a possible suspension due to a recent marijuana incident, the AJC has reported.

Harvey-Clemons (6-5, 212) is slated to start at safety and could miss the season-opener at Clemson on Aug. 31.

According to the AJC, UGA police were called to Vandiver Hall on campus after a residence hall assistant smelled the odor of marijuana coming from room 303.

The occupants of that room were Josh Harvey-Clemons and Ty Flournoy-Smith, the latter of which will be transferring to a junior college.

The police report stated that both players “exhibited signs of marijuana ingestion” and admitted that they had “smoked a blunt.” A digital scale and a plastic bag containing possibly a “flake” of marijuana were found in the apartment, but police decided there was “no physical evidence to support prosecution.”

However, the matter will be turned over to the UGA Office of Student Conduct, which could result in the possible suspension of Harvey-Clemons for one game or more.

Flournoy-Smith must have been in previous trouble, as the article indicates that head coach Mark Richt advised him to transfer to a JUCO.

This is Harvey-Clemons’ second run in with the law, as he was an occupant in former UGA running back Isaiah Crowell’s car when Crowell was arrested on weapons charges last summer.

Mark Richt confirmed today at the SEC Spring meetings in Destin, FL that Josh Harvey-Clemons will miss the Clemson game on Aug. 31.

“Here’s what I’ll say on that. Josh Harvey-Clemons is going to miss the first game of the season. That’s all I’m going to say” Richt said.