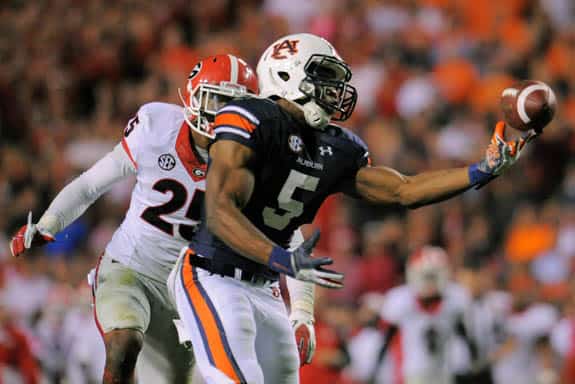 Georgia didn’t play a very good first half, to say the least. They were behind 27-10 at the break, but they fought back to take the lead late in the fourth quarter only to have victory snatched away by a miracle pass from Auburn.

Leading 38-37 with only 1:49 remaining, Georgia kicked off and covered well to place Auburn at their own 22. The Tigers moved the ball to their 33 on three plays, then took an incomplete pass and a sack back to their own 27.

Then it happened. In a play that will long be remembered as “Marshall’s Miracle” or “Miracle on the Plains,” Auburn quarterback, and former Georgia cornerback, Nick Marshall tossed a 73-yard touchdown pass to Ricardo Louis to give the Tigers an improbable 43-38 victory.

But it wasn’t just a TD pass, it was more of a Hail Mary into double coverage. Georgia’s Tray Matthews and Josh Harvey-Clemons simultaneously made a play on the ball, even though it looked like Matthews had a clear path to a game-clinching interception. However, the ball ended up being tipped toward Auburn’s Ricardo Louis, who took the pass in for a touchdown and ultimately an Auburn victory on the plains.

Georgia had a slim chance at the end after getting the ball at their own 25 with only 25 seconds remaining in the game. Murray moved the Dawgs down to the Auburn 20, but Murray’s pass on the final play of the game fell short.

It was a heartbreaking loss for a Georgia team that was slow out of the gate, but fought back in the second half to stun the 7th-ranked Tigers and take the lead.

Bulldog quarterback Aaron Murray led the charge. He completed 33-of-49 passes for 415 yards and two touchdowns. He also rushed for a 16-yard touchdown in the 3rd quarter and a 5-yard TD late in the fourth to give the Dawgs the one point lead.

Murray’s primary receiver was tailback Todd Gurley, who caught 10 passes for 77 yards. Gurley also led the team in rushing with 79 yards on 15 carries.

Rantavious Wooten accounted for the most receiving yards with 99 on five receptions (and 1 TD). Michael Bennett had seven catches for 89 yards, while Arthur Lynch caught four passes for 75 yards and a big fourth-quarter touchdown.

Overall, Georgia racked up 532 yards of offense (415 passing, 117 rushing). But that wasn’t enough to counter the Auburn ground attack, which tallied 323 yards plus 243 through the air (73 on their final play).

The victory for Auburn was their first in the series since 2010 and second in the last eight games in The Deep South’s Oldest Rivalry. The Tigers now lead the series 55-54-8.