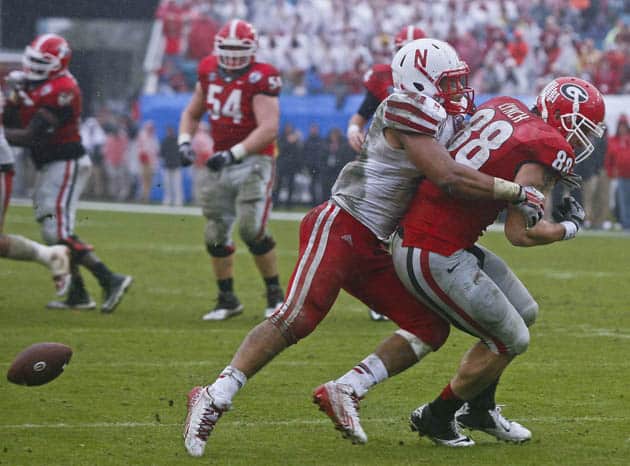 Several mistakes by Georgia, including allowing a 99-yard touchdown pass on a third and 14, proved costly as the Bulldogs fell to the Nebraska Cornhuskers 24-19 in the 2014 TaxSlayer.com Gator Bowl.

Georgia finishes the season 8-5 overall (5-3 SEC) and will not be ranked in any of the final polls.

The game got off to a slow start, partially due to the wet weather and below average condition of the turf at Everbank Field. The two teams couldn’t get anything going in the first quarter, which ended scoreless at 0-0.

Georgia struck first in the 2nd quarter after a promising drive stalled at the Nebraska 21. Marshall Morgan then hit a 39-yard field goal to put the Dawgs up 3-0.

On Nebraska’s ensuing possession, the Georgia defense held them to a three-and-out, but then Reggie Davis muffed Nebraska’s punt at Georgia’s own 14. The Cornhuskers punched it in two plays later to take a 7-3 lead.

J.J. Green then returned the kickoff to the 48, and Georgia drove down to Nebraska’s 11 before stalling once again. The Dawgs settled for a Morgan field goal to make it 7-6.

Nebraska answered with their own field goal, and then Georgia again couldn’t punch it into the endzone and came away with three as time expired in the first half.

The second costly mistake of the game came on Georgia’s opening possession of the second half when Hutson Mason’s pass was picked off by Josh Mitchell. Georgia’s defense couldn’t hold and the Huskers punched it in to make it 17-9.

Just as they had most of the game, Georgia drove down the field again only to stall out at Nebraska’s 13. Another field goal made it 17-12 with 6:32 to play.

Then Georgia’s next costly mistake happened, and it was the biggest. The Georgia D had Nebraska backed up to their 1-inch line on 3rd-and-14. But after a UGA timeout to force a spot review, Nebraska quarterback Tommy Armstrong, Jr. launched a 99-yard touchdown pass to Quincy Enunwa.

Georgia then went three-and-out, and it seemed like the Dawgs were resigned to a defeat. But the Georgia defense stood strong forced a three-and-out of their own. Later, on the first play of the fourth quarter, Hutson Mason found Todd Gurley for a 25-yard touchdown pass and suddenly it was 24-19.

But that would be the last score for either team. Twice Georgia had the ball deep in Nebraska territory, and twice they turned it over on downs after a dropped pass.

Rantavious Wooten dropped the first one on 4th-and-9 from Nebraska’s 15 with 3:18 to go. On Georgia’s final possession, senior tight end Arthur Lynch dropped a sure first down on 4th-and-3 from the Nebraska 16.

“I think I turned my head at the last second and was thinking end zone,” Lynch said. “It’s one of those situations. It’s not so much I dropped the pass. It’s that I let my team down. At the end of the day, it’s one of those things that you can never forget, brush off your shoulders.

“It’s a win or a loss, and we lost. But I will never able to forget this one. If I run that play 49 more times, I make the catch.”

The late drops were a punctuation mark on how sloppy and mistake-prone Georgia played throughout the entire game. From turning the ball over to settling for field goals and then the drops, the Bulldogs couldn’t get out of their own way.

Mason finished the game 21-of-39 for 320 yards, one touchdown and one interception. His favorite target was Todd Gurley, who hauled in seven catches for 97 yards and a TD. Gurley also rushed 21 times for 86 yards.

Georgia actually outgained Nebraska in total yardage 416-307 and won the time of possession 33:24 to 26:36. But the Dawgs had two turnovers to Nebraska’s one, and each of Georgia’s turnovers led to touchdowns.

The 2013 season will be remembered by Georgia fans as one of the toughest, most heartbreaking in recent memory. The Dawgs had eight games decided by seven points or less, two overtime games, and the miracle tipped pass at Auburn.

The Bulldogs now look ahead to Spring practice and the annual G-Day game which is set for Saturday, April 12.