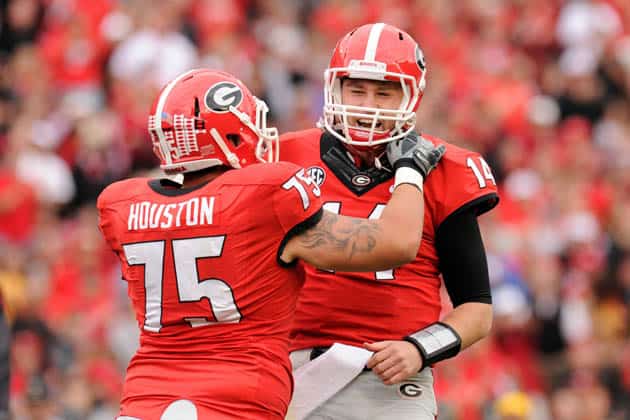 The Hutson Mason era is beginning earlier than expected, but a win in a game filled with good ole fashioned hate would be a great start to building his legacy. It’ll be the first time since 2009 and in 53 games that a quarterback not named Aaron Murray will be starting for the Bulldogs.

The Georgia Bulldogs will square off with the Georgia Tech Yellow Jackets this weekend at Bobby Dodd Stadium, where the Bulldogs are a three-point favorite.

Will head coach Mark Richt get his 12th win in 13 tries against the Yellow Jackets, or will Paul Johnson win for just the second time against the Bulldogs?

Why Georgia Tech can win this game

For the first time in a while, Georgia Tech appears to have some matchup advantages against the Bulldogs. Yes, the Bulldogs have college football’s most complete running back. However, the Yellow Jackets are ranked 10th in the nation in rushing defense at 104.2 yards per game.

The key to stopping the triple option is discipline, not talent. The Bulldogs defense, on the other hand, has had the opposite problem this season. There is no doubting that Todd Grantham’s bunch is tremendously talented. However, at times they have been lost before the ball is even snapped.

If the Bulldogs are not efficient on offense and defense from the start, this defeat will sting equally to the Auburn Game.

Why Georgia can win this game

The Bulldogs are more talented than the Yellow Jackets at almost every position. Mason might be making his first start, but by staying at Georgia when many thought he would transfer, the redshirt junior quarterback has hit the jackpot.

Even with all the injuries the Bulldogs have endured, they are getting healthy again, and Mason will be surrounded by future NFL players.

Yes, the Yellow Jackets have a very good run defense, but they have not had to tackle running backs as physical as Gurley and Brendan Douglas.

Moreover, while they have been good against the run, they have not been very good in pass defense. Georgia Tech ranks 82nd nationally in pass efficiency defense, and most offenses with legitimate passing games have been able to throw the ball at will.

For UGA I believe it is going to be the Bulldogs’ defensive backs’ ability to stick to their assignment against the triple option and tackle in space. I absolutely love Shaq Wiggins and the potential he has for the future. However, he needs to add 10 pounds of muscle in the offseason, and that weight is not going to appear overnight, so he could be a liability this game.

For Georgia Tech, the Yellow Jackets must average close to four yards per carry on first down to have a shot at winning this game. They cannot be in 2nd- and 3rd-and-long situations. If they are able to get large gains on first down, the offense will have a great day and the Georgia offense will spend most of the day on the sidelines.

There is risk of defeat and injuries any time you face a triple-option team. Look no further than last weekend when Georgia Southern defeated a much more talented Florida team with its ground option attack.

The Yellow Jackets will score some points on the Bulldogs. However, at the same time I believe that Georgia Tech’s improved defense is nothing more than fool’s gold.

Against Clemson and Miami, the Yellow Jackets were exposed. Clemson racked up 556 yards of total offense, 173 on the ground, when they defeated the Jackets 55-31 two weeks ago.
Earlier in the season, Georgia Tech was beaten 45-30 as the Hurricanes piled up 551 total yards, 227 on the ground.

The Yellow Jackets will keep this game close early, but a costly turnover or fourth-down stop will turn the tables, and the Bulldogs offense will flourish.