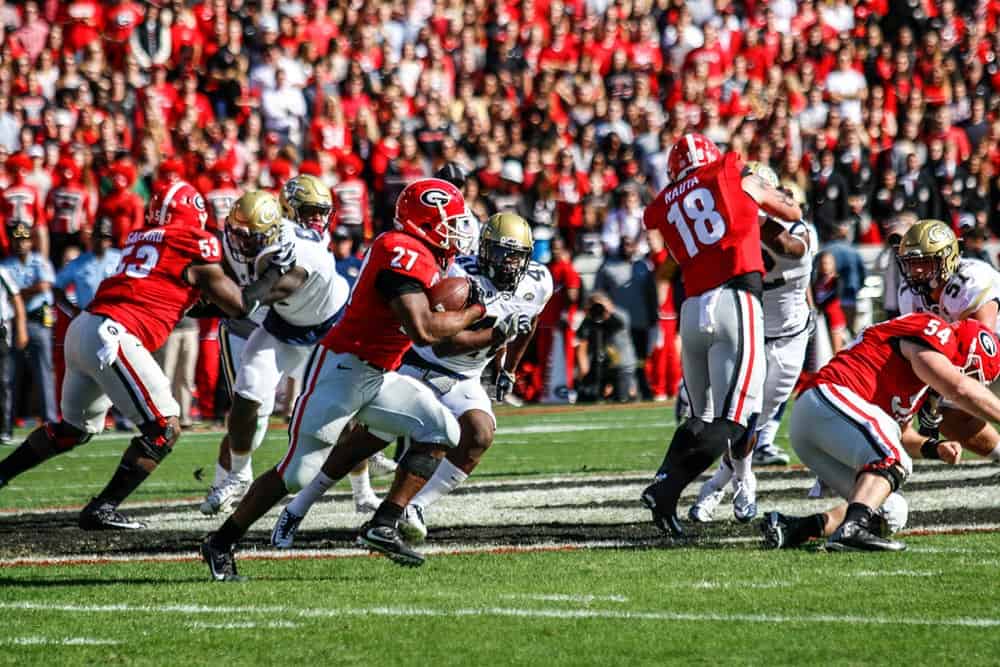 After a 14-14 stalemate at the half, Georgia scored 13 points in the third quarter to pull ahead 27-14; however, a 94-yard touchdown drive followed by capitalizing on a Georgia interception led to the visitors sealing the late win.

“This team has grown up,” said head coach Kirby Smart about the team’s improvement this season. “The young kids aren’t freshmen anymore. We’ve had some tight ballgames and some tough situations. We will continue to grow and develop. We will get better through a willingness to work and through good practice habits.”

For the game, Georgia got most of its offensive yards on the ground with junior Sony Michel leading the attack with 170 yards and a touchdown. Junior Nick Chubb finished with 88 yards, pushing him to third all-time with 3,282 career rushing yards. Chubb now trails only Todd Gurley (3,285) and Herschel Walker (5,259) in the ranking.

Freshman Jacob Eason went 14-for-27 on the day with 139 yards, finding sophomore Terry Godwin for a team-best five catches and 53 yards while junior Isaiah McKenzie had the lone receiving touchdown.

The teams traded points in the first two quarters, as Georgia Tech struck first with a 42-yard touchdown run by Clinton Lynch. Georgia countered with Michel finding the endzone with 1:38 remaining in the first.

The Jackets increased their lead to 14-7 with Justin Thomas completing a 64-yard throw to Brad Stewart before Marcus Marshall ran it in for the score. The Bulldogs again responded with Michel breaking off a season-long 42-yard run to the Georgia Tech 15 before Eason found McKenzie for the tying score.

The third quarter was all Georgia, as a stifling defense held Georgia Tech to just 21 yards in the frame. Smith forced a Jacket fumble in the visitors’ opening drive with Dominick Sanders recovering it for 13 yards. Rodrigo Blankenship gave Georgia the lead with a 27-yard attempt before Chubb ran into the endzone untouched in the Bulldogs next drive. Blankenship made his second field goal with just under 30 seconds to give Georgia the lead at 27-14.

Momentum changed in the final quarter, as Georgia Tech cut the advantage by six with its long drive. After taking over in Bulldog territory with Lance Austin’s interception, Qua Searcy marched in on a six-yard rush to steal the win.

Georgia will be making its 52nd appearance and 20th-consecutive bowl game as it owns a 29-19-3 mark. Georgia’s destination and opponent will be announced on Sunday, Dec. 4.

*Series History: After today’s 28-27 result, Georgia saw its three-game winning streak snap. For only the third time in the past 16 seasons, the Governor’s Cup Trophy will not reside in Athens. The series is now 65-39-5 in favor of Georgia. In the last eight meetings with Tech, Georgia is 6-2 with both losses coming in Athens in 2014 and today.

*Michel Leads Ground Attack: Georgia used a powerful rushing attack to accumulate 263 yards and two touchdowns. The Bulldogs ran an 11-play drive for 75 yards that took 6:00 in the first quarter to tie the score at 7-all. This drive was the longest drive by time for Georgia this season after posting a 5:54 scoring drive at #23 Ole Miss. Junior TB Sony Michel capped the drive with a 10-yard touchdown run, which marks his third touchdown this season.

Michel then had a season-long rush of 42 yards to push him over 100 yards to set up the Bulldogs’ second touchdown. Michel had 12 carries for 117 yards in the first two periods and finished with a career-high 170 yards on 19 carries. His previous career high was 165 versus Kentucky last year. He now has eight career 100-yard rushing games and three this season. Michel has 2,324 yards in his career and that’s good for 10t.h in school history while teammate Nick Chubb moved up to 3rd today with 3,282 yards. Junior Isaiah McKenzie scored UGA’s second touchdown on a 6-yard reception giving him a team-leading 10 total touchdowns (seven receiving) this year.

*Points Off Turnovers: The Bulldogs are now +7 in Turnover Margin after tallying an interception and a fumble recovery and throwing two interceptions. Junior S Dominick Sanders snagged his 12th career interception (team-high third this season) on the Georgia 9-yard line with 0:56 left in the first half. Georgia leads the SEC with 15 interceptions in 2016. The Bulldogs ran out the clock on the next possession. On the opening drive of Georgia Tech, sophomore ILB Roquan Smith forced a fumble that Dominick Sanders scooped up and returned it 13 yards to the Georgia Tech 28. This was Smith’s second forced fumble this year. Redshirt freshman PK Rodrigo Blankenship booted a 27-yard field goal to put Georgia up 17-14 on the next drive. Blankenship was 2-for-3 for the game (missed 42 yarder, connected on a 32 yarder) and is 13-for-16 on the year. Tech got an interception from Lance Austin at the Georgia 46 with 3:39 left in the contest. It led to a touchdown and 28-27 lead. The last interception by Tech came on the final play of the game. Overall, Georgia has forced 25 turnovers for 50 points while opponents have turned 18 Bulldog miscues into 66 points this season.

*Eason Review: Freshman QB Jacob Eason finished 14-for-27 for 139 yards and one touchdown but had his first game with two interceptions. The second pick happened on the final play of the game. At this point, he is 192-for-349 for 2,266 yards with 14 touchdowns and eight interceptions. He has started the past 11 games.

*Up Next: Georgia (7-5) will be making its 52nd appearance in a bowl game and it owns a 29-19-3 mark. Georgia’s destination and opponent will be announced on Sunday, Dec. 4. Georgia will be making their 20th consecutive trip to a bowl.

On the game:
“I’m sick for the seniors who have given so much for our program. They fought their tails off. To finish like that was not a very good job on our part. We had a big lead, but we didn’t finish it.”

On Tech’s fourth-quarter scoring drives:
“They did a good job of blocking our guys. They hit some passes to loosen us up and make us play more cautious. They ran it when they had to and they scored touchdowns in the red area.”

On the UGA defense:
“Early on, I didn’t think we (played well). They had some nice schemes and we had to adjust. Then we got some turnovers, which is big against this offense. Any time you play them, you have to control your possessions and be methodical yourself.”

Looking back on the season:
“This team has grown up. The young kids aren’t freshmen anymore. We’ve had some tight ballgames and some tough situations. We will continue to grow and develop. We will get better through a willingness to work and through good practice habits.”

On the seniors:
“I hate it for our seniors. They are what this game is all about. I hate that we can’t send them out of on top at home. … The best thing we can do for our seniors is get better and keep improving the program. Hopefully we can finish with a win in the bowl and send them out the right way.”

On the Jacob Eason interception:
“It was a quick out and we thought we had to look we wanted. We thought we could advance the ball, get two more first downs and run the clock out. I saw the ball come off Terry’s hands and they caught it.”

On recruiting:
“Recruiting is the lifeblood of our program. We have good players now and we’ll continue to recruit good players. We’ll relentlessly go out the next two weeks to try to get the right kind of young men to come to the University of Georgia. We’ll attack it hard.”

On being ahead in fourth….
“No, (I never thought that we had this). Any game, you never know and with an offense like that, they had the ball for a long time. You can’t go out there and think that you have any game. You have to keep your foot on the gas and keep playing hard.”

On when momentum switched…
“Any time you go three and out or any turnovers, the momentum is always going to shift.”

On not being able to prolong drive after fourth-down stop…
“We had a lot of opportunity to make big plays. We missed them. Even when we went three-and-out, those are big drives that could have helped us win this game.”

On keeping foot on the gas…
“I won’t say it didn’t happen cause our guys came out and fought hard, but we just didn’t make the plays.”

On lead in fourth…
“My only thought was we keep moving the ball, we keep running and going down the field as slow as possible, we’ll run down the clock and do our job the best way we can and come out with the win. Unfortunately, that didn’t happen.”

On sideline mood…
“Towards the end, we stayed positive. When the defense was on the field, we stayed positive. We hoped that the defense would stop them but they didn’t. We all played a part in it. In the locker room, everyone was kind of down. We played this game for the seniors and everybody wanted us to win so the seniors could go out with a good win but it didn’t happen like that.”

On momentum flip after three-and-out…
“It was a big momentum flip. We thought we had a great play to execute it and get the first down but it didn’t turn out as well with the interception, so we just had to get back out on defense and play the best we can.”

On final Georgia Tech touchdown…
“The guy just made a play. I take no credit away from him. He saw that the pass wasn’t there and dove at the five yard line.”

On Georgia Tech comeback…
“It was frustrating. Like I was saying earlier in the week, this game is a hatred game and both teams are going to bring it and they brought it today. They weren’t going to just lay down. They fought and they were the better team today.”

On defensive adjustments in third quarter…
“We just wanted to stop them getting outside of us. With that offense, they just made plays. There was a lot of second effort from those guys.”

On fourth quarter symbolizing season…
“I don’t want to take any credit away from them. They came out, they jumped out on us early, we responded, and they finished the game. This game is going to be like this almost every year. Both teams are going to bring it. We are not taking anything away from those guys. A lot of those plays in the fourth quarter and third quarter were just second effort plays. Like that guy dove from the five, stretched the ball in and put his body on the line for his team. I tip my hat off to him, no adjustments can stop that. The play that they were trying to run, we defended it. His instincts took over and he became a ball player and dove from the five.”