Georgia's 2012-13 Basketball Schedule to get tougher?

Georgia's 2012-13 Basketball Schedule to get tougher? 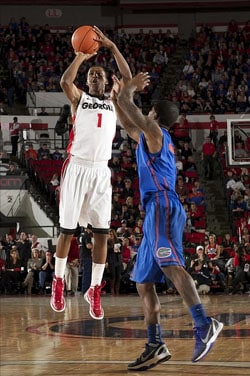 Georgia’s 2012-13 basketball schedule is already shaping up to be tough. But according to a report by CBSSports.com, their schedule could get even tougher.

Last month, SEC coaches met in Destin and discussed the basketball schedule and the future scheduling format under the new 14-team league. Teams will play an 18-game slate which will consist of two games against a permanent rival, four rotating teams twice and one game against eight other teams.

Georgia’s permanent rival will be South Carolina. They will play the Gamecocks twice each year, every other SEC team once, and then four more games for a total of 18.

Apparently, the teams to be played and the rotation was set last month. But last week, the SEC sent an email to coaches with schedules that differed from what the had previously agreed on.

Sources also told CBSSports.com that Georgia’s SEC schedule “got harder” but did not specify the particular changes. Most likely, there was a change in the opponents that the Bulldogs play twice.

For instance, if Georgia was slated to play Florida, Kentucky, or Tennessee once and it was changed to twice, that would certainly make the schedule a little harder.

Georgia’s 2012-13 non-conference schedule currently features three 2012 NCAA Tournament teams: Iona, South Florida, and Southern Miss. The Dawgs will face four and possibly five tournament teams depending on the Legends Classic semifinal bracket. Georgetown and Indiana both made the tournament in 2012.

Here is a look at Georgia’s 2012-13 non-conference schedule: