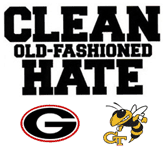 The Georgia at Georgia Tech football game from 1997 will be shown on ESPN Classic today at 4:00 p.m. ET.

After the Yellow Jackets took a 3-point lead with 48 seconds remaining, Mike Bobo led the Dawgs on a 65-yard drive culminating in an 8-yard touchdown pass to Corey Allen with 8 seconds remaining. Georgia won the game 27-24.

The game featured one of Larry Munson’s legendary radio calls:

“Our hearts they was torn out and bleeding, we picked it up and we stuck it back inside. I can’t believe this. We won 27-24, and at the end we had no business winning this game.”

Below is a montage of Munson’s calls. A portion of the 1997 Georgia-Georgia Tech call is the second one (h/t BernieDawg):

Check out our UGA TV Schedule each week for Bulldog sports on television.