Georgia falls to Belmont in NIT

Georgia falls to Belmont in NIT 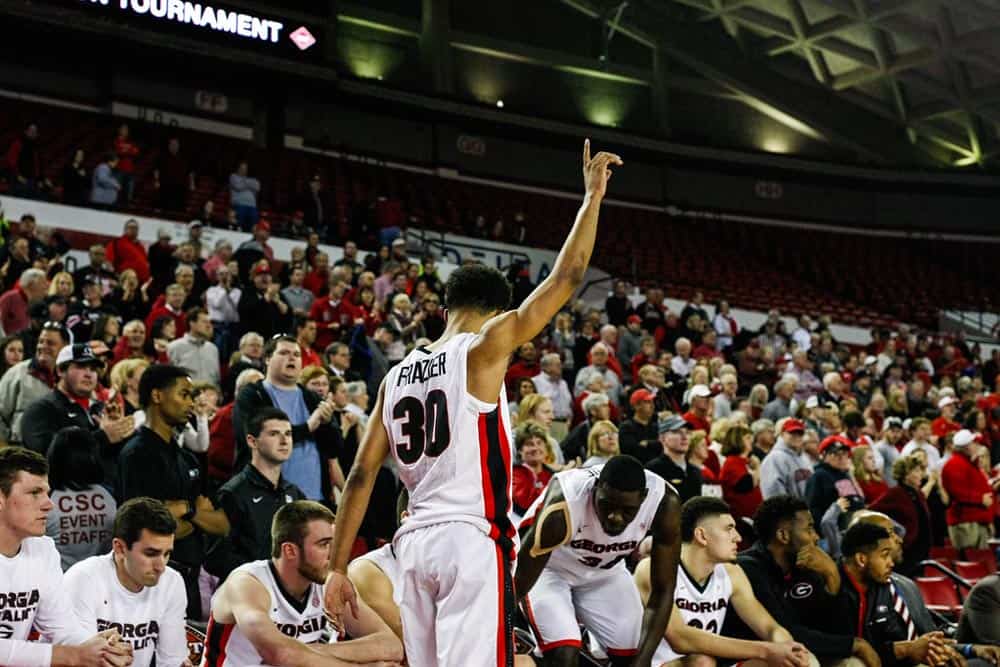 ATHENS, Ga. – Despite 29 points from J.J. Frazier, the Georgia Bulldogs fell 78-69 to Belmont in the first round of the 2017 National Invitation Tournament.

Frazier, who finishes the season with 13 games with 20 or more points, led Georgia (19-14) in scoring and added a pair of rebounds and assists. William Jackson II and Tyree Crump each scored 10 points, and as a team, the Bulldogs committed a season-low five turnovers.

“We just could not find a lineup that could get stops and also play offense,” Georgia head coach Mark Fox said. “We were disjointed and Belmont has a great shooting team. We couldn’t settle on a defense that could slow them down on the three-point line. They had two spurts, one to start the second half and one in the middle of the first, that they knocked in some three-point shots and that really was the difference in the game.”

The Bulldogs were without their second- and third-leading scorers, as Yante Maten and Juwan Parker each missed the game due to injury. Maten suffered an unexpected setback from his knee sprain following last weekend’s SEC Tournament, while Parker suffered a partial tear to his right Achilles.

The game opened with a series of runs, with Belmont (23-6) racing out to an 11-4 lead and the Bulldogs quickly tying the game at 13. Later, after holding Georgia to a stretch of 0-of-5 shooting, Belmont was able to go on another run, this time taking a 25-17 advantage. The Bruins, who came into the game averaging nearly 30 three-point attempts per game, hit their fifth three-pointer of the game just over 10 minutes in and led by as much as nine in the opening period.

Entering the final five minutes of the first half down by seven, Georgia got layups on back-to-back possessions from Jordan Harris and Frazier and cut the lead to three. On the next Georgia possession, following some quick ball movement, E’Torrion Wilridge found Tyree Crump for a three-pointer that tied the game. During the 7-0 run, the Bulldogs were able to hold Belmont scoreless for nearly three minutes. The Bruins then put home a few shots in the final two minutes and took a 37-34 lead into the break.

In the first five minutes of the second half, Belmont was 5-of-5 from three-point range and got out to a 54-43 lead. At the 11:46 mark, Frazier went 1-of-2 at the line and cut the lead to nine. The first free throw, which Frazier missed, snapped a Georgia-record 45 consecutive made free throws for the senior. He finishes his career with the highest free-throw percentage in Georgia history at 84.1-percent, breaking Jerry Eppling’s record of 82.2-percent.

With the Bulldogs down 68-54, Frazier scored the game’s next six points and got the deficit back down to eight, but the Bruins led by 10 following the final media timeout. The Bulldogs could not close the gap, scoring just seven points in the game’s final four minutes. Belmont finished the game 14-of-31 (45.2-percent) from three-point range and won the rebounding margin, 35-32.

• The contest was a rematch of last season’s first-round NIT game, a 93-84 win for the Bulldogs.

• J.J. Frazier moved to fourth all-time for single-season points at Georgia, suprassing Walter Daniels’ mark set in 1979. He finishes the season trailing Jacky Dorsey by just six points for third on the list.

• A streak of 45 consecutive free throws made by Frazier ended at the 11:46 mark of the second half. It was the second-longest streak in SEC history and was the longest ever at UGA.

• In the five games in which Yante Maten missed due to injury (including the Kentucky game in which he was injured in the first two minutes), Frazier totaled 36, 28, 29, 31 and 29 points.

• After leading 37-34 at the break, Belmont hit its first six 3-point attempts and seven of its first nine shots of the second half, all over the first seven minutes, to build a 12-point lead.

• The contest was the second double-digit scoring game in William “Turtle” Jackson II’s career, with the previous coming against Oakland this season (also 10 points).

• The 45.2-percent shooting clip by Belmont was the third-best by a non-conference opponent against Georgia this season, trailing Furman (50-percent) and

On tonight’s game…
“We just could not find a lineup that could get stops and also play offense. We were disjointed and Belmont has a great shooting team. We couldn’t settle on a defense that could slow them down on the three-point line. They had two spurts, one to start the second half and one in the middle of the first, that they knocked in some three-point shots and that really was the difference in the game.”

On offense sputtering…
“We just had no rhythm or execution with the lineups that we had. We tried lots of different formulas but we couldn’t really execute with the guys in the spots they were in. So we went to just trying to play off of ball screens, getting penetration and breaking down the defense which got us back in it but that is a tough way to make a living over 35-40 minutes.”

On trying to replace missing Yante Maten and Juwan Parker’s offense…
“We knew we would miss the scoring but those two guys are also two of our better defenders so we were most concerned about our ability to get stops. However, Belmont has a very good, experience team and they certainly made us pay for how we defended tonight. “

On J.J. Frazier…
“He has been a tremendous Georgia Bulldog. He’s going to have played in four postseasons and leave here as statistically one of the best players to every play here. He has brought a competitive spirit to our program that I think we will be able to look back on much like Kentavious (Caldwell-Pope)’s competitive spirit. It just becomes something that becomes apart of your fabric and it carries on to generations after you leave. I think you will see that in the result of what J.J. has done here. He is a remarkable young man and we are certainly going to miss him.”

On playing without Maten and Parker…
“It was hard. Belmont shoots really well, and its hard to adjust for that overnight.”

On being celebrated at the end of the game…
“It was nice to know that the fans appreciated my hard work. I put my heart and soul into this university. If you were to cut me open, my blood would be red and black. I love Georgia. Its nice that my efforts didnt go unnoticed.”

On tonight’s game…
“It’s a tough blow for those guys not to have Maten. I figure that we started out plus-33 points in this game because I think that’s what he got against us a year ago. He played phenomenal and I think we would have had a really hard time guarding him. I love winning this game, don’t get me wrong, but I am such a fan of Mark Fox and the job he does and the kind of person he is. I know that’s a tough loss. We’ve lost home games that have mattered before. Home games that the perception is that you’re not supposed to lose that game just because of levels or something like that. That’s tough that he didn’t have all his ammunition with a couple guys out – they’re just not the same team without them. That doesn’t diminish any effort that we gave or how well we played. That was perhaps our best game of the year.”