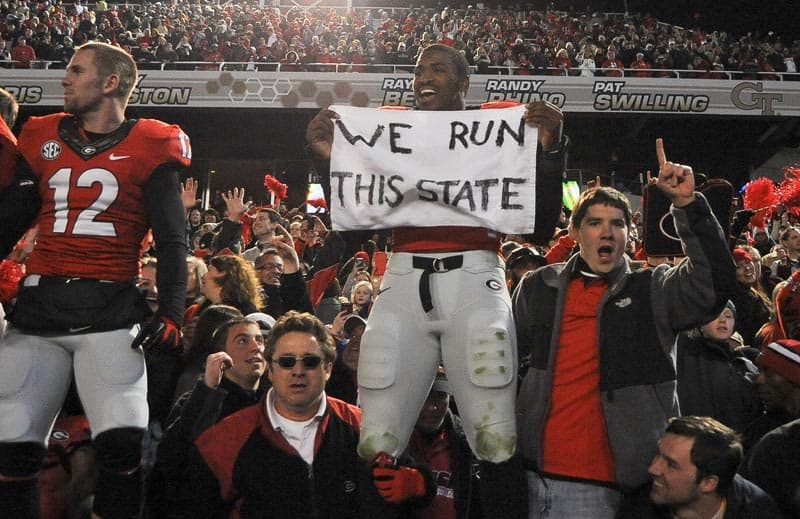 The No. 8 Georgia football team returned to the Woodruff Practice Fields on Monday with a 90-minute workout in shorts and shoulder pads.

The Bulldogs (9-2, 6-2 SEC) will wrap up the regular season with Saturday’s game against 16th-ranked Georgia Tech (9-2, 6-2 ACC) at Sanford Stadium. The game will kick off at noon and will be televised by the SEC Network.

“All of our focus is on a very good Georgia Tech team,” Georgia coach Mark Richt said. “We can’t control anything else that’s going on. All we can control is the way we practice this week and how we perform on Saturday. The Georgia Tech offense is one that we don’t see very often and our scouts did a good job of simulating it. We’ll need them to keep doing that all week. I thought our intensity was right where it needed to be today. We got the week off to a great start.”

Richt said the captains for Saturday’s game will be the 27 members of the senior class. Representing the Bulldogs at the coin toss will be center David Andrews, quarterback Hutson Mason, defensive lineman Ray Drew and linebacker Ramik Wilson.

Monday’s practice was held in balmy conditions, with the temperatures reaching into the low 70s. Exactly one week ago, the Bulldogs worked out in temperatures in the 30s.

Georgia leads the series 64-37-5 and doesn’t count two Georgia Tech wins during World War II when the Yellow Jackets utilized players from a naval officer’s training program hosted on campus. The Bulldogs are 12-1 against Georgia Tech under Richt. Under Richt’s direction, Georgia owns a 55-10 record against teams from outside the SEC. The Bulldogs are 39-1 at home in that span.