Jacob Eason has stellar G-Day separates himself in QB competition

Jacob Eason has stellar G-Day separates himself in QB competition 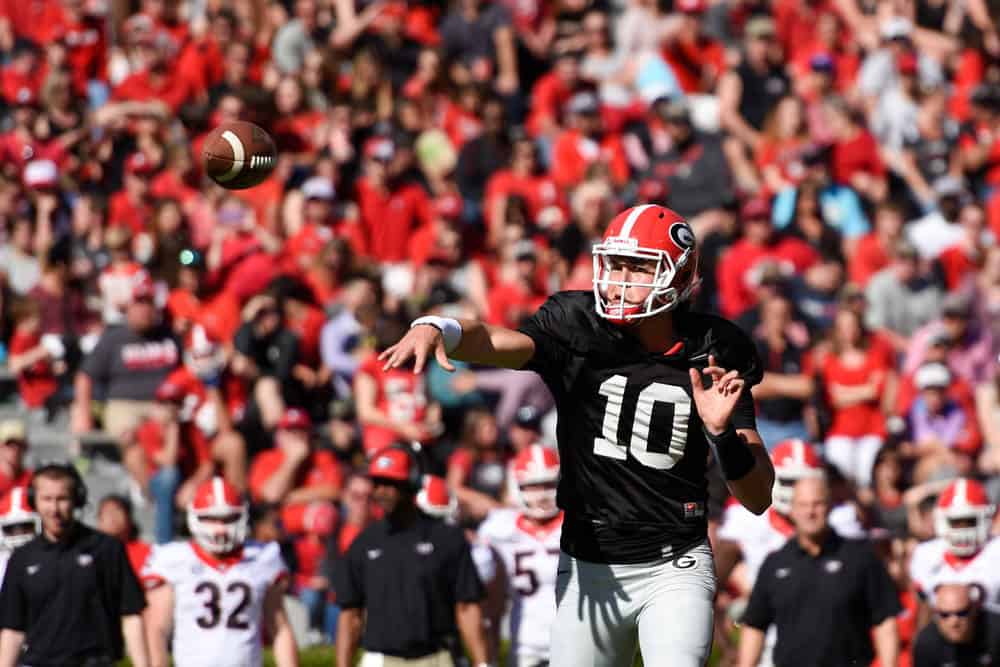 Georgia fans attended G-Day to see how freshman and early enrollee quarterback Jacob Eason impress them in his first appearance in front of fans, and they most certainly got what they wanted to see.

The roar was deafening when Eason took the field, as each of the 93,000 in attendance knows of the hype that surrounds the former five-star quarterback.  Eason, the 18-year old who would still be attending high school at Lake Stevens, showed no nerves in front of the massive crowd in his first opportunity in a college uniform. After an unimpressive performance in his last showcase, the Army All-American Bowl Game, he needed to show many what he was made of.

He did just that, finishing with an accurate 19-for-29 with 244 yards. Although he still looked like a freshman at times as he looked puzzled with the football in his hands at times, he was firing the ball with extreme precision at other times as he showed what his potential could be. However, how he might perform under pressure was something that couldn’t be seen in the spring game. If Eason is to start this upcoming season, having fast, big and talented SEC edge rushers coming at you every down is an entirely different scenario.

Eason’s day was highlighted by a pair of plays to fellow early enrollees, a deep pass with a rocket-like trajectory to Riley Ridley, and a touchdown pass to Isaac Nauta. As Nauta and Ridley will be two potential cornerstones in the passing game, those connections are some you could see a lot more throughout the next few years.

The performance by Eason also had an impact on the recruiting trail, as wide receivers are looking for a quarterback who may give them the most opportunities to succeed. Four-star wideout Jeremiah Holloman felt as if Eason can do just that, as he told SicEmDawgs.com that he was “impressed with (Eason) being able to come out and produce at a young age.” The impressive show put on by the freshman among other things throughout G-Day impressed Holloman so much that his experience has made Georgia emerge as his current leader over Tennessee.

There are many that are blown away by the performance, but pump the brakes a little bit, as Georgia’s head man didn’t seem blown away right on the spot. “He did a good job,” Kirby Smart told a group of reporters post-scrimmage. “I’ll reserve a lot of judgement until I get to watch all of the tape.” Eason was playing on the third-team coming into the game, and a jump to being named starter after a small sample of 29 pass attempts would be unfair to the other contenders, Greyson Lambert and Brice Ramsey. As said many times by Smart, Georgia will hold off a decision until after Fall practice.

Nonetheless, Eason’s performance was what many were looking for, as the hype definitely showed some backing. Expectations will be placed on Eason for the upcoming season and for the future. Can he meet those lofty expectations? Only time will tell.