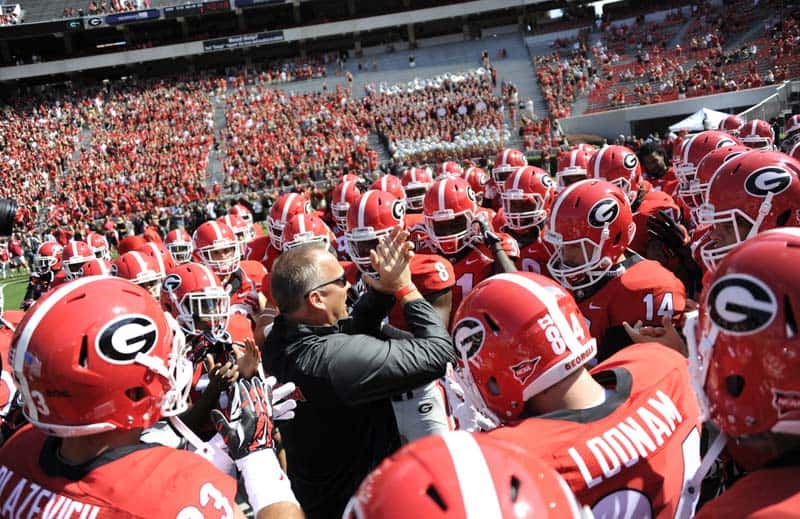 Update: Georgia will face Louisville in the Belk Bowl on Dec. 30.

Georgia finished the 2014 regular-season 9-3 overall and 6-2 in the SEC and qualified for a bowl game for the 18th consecutive season.

But it wasn’t exactly the result Georgia Bulldog fans were hoping for. The Dawgs lost to three rivals, missed the SEC Championship Game, and fell out of contention for a College Football Playoff spot.

The best Georgia can hope for now is a New Year’s Day bowl game. Lets take a look at the bowl options for the Dawgs.

Formerly the Capital One Bowl, the Citrus Bowl is one option for Georgia to play on New Year’s Day. The Citrus Bowl gets the first SEC selection after the ‘New Year’s Six’ bowl games are determined by the College Football Playoff selection committee.

If Georgia is selected by the Citrus, they would face a team from the Big Ten.

After the Citrus Bowl makes their SEC pick, the conference office will then place teams into the “pool of six” bowls: Belk, Liberty, Music City, Outback, TaxSlayer and Texas.

According to UGA athletic director Greg McGarity, if they aren’t selected by the Citrus Bowl, the Dawgs prefer to play in the Outback Bowl in Tampa, Belk Bowl in Charlotte or the Music City Bowl in Nashville.

Georgia last played in the Outback Bowl on Jan. 1, 2012. Current projections have one of the following Big Ten teams playing there: Maryland, Minnesota, Nebraska, and Wisconsin.

The Belk Bowl would be an intriguing game for the Dawgs. Not only is it closer to Athens than Florida, Georgia could end up meeting Notre Dame there. NC State has also been projected to play there.

Georgia also has a slight chance of matching up with Notre Dame in Nashville. ACC teams that have been projected for the Music City Bowl include Duke and Louisville. A matchup with Louisville would pit Georgia against their former defensive coordinator Todd Grantham.

As far as the other three “pool of six” bowls, Georgia is a long shot in each. UGA played in the Gator Bowl last season, the Liberty Bowl has made it known they want Tennessee, and the Texas Bowl is likely to favor an SEC West team.