Bulldogs gearing up for G-Day

Bulldogs gearing up for G-Day 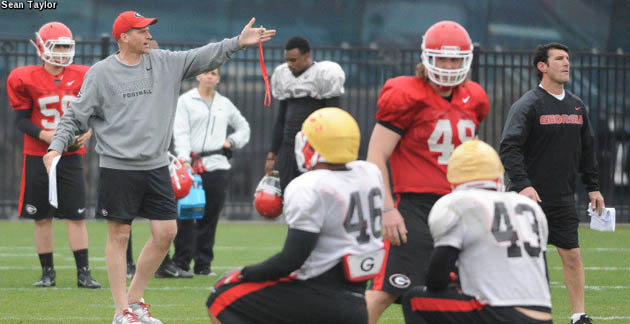 ATHENS, Ga. – The Georgia football team held its next-to-last practice before the G-Day game Tuesday afternoon at the Woodruff Practice Fields. The Bulldogs will practice again on Thursday before the annual G-Day game Saturday at 1 p.m. at Sanford Stadium.

“This was practice number 11 for us,” said head coach Mark Richt. “We are pushing them hard, and most of them are getting better.”

Richt said Saturday’s game will consist of four 12-minute quarters. The Red team will include the No. 1 offense and No. 2 defense, while the Black team will feature the No. 1 defense and No. 2 offense. There will be no kickoffs, and each punt will result in a 35-yard change in field position.

“We will try to get everyone some reps,” Richt said. “Some guys may start on one side, and then they will flip jerseys the second half. We might have some guys working with the ones who will only play a half, and a two may go to the number one group.”

Saturday’s game will also give fans a chance to catch a glimpse of the Georgia defense under the direction of four new assistant coaches.

“I don’t think we are going to try to do a lot of things on defense Saturday,” Richt said. “I think we’ll line up and play some good, solid fundamental defense. I doubt we will do everything that we’ll do in the fall. We aren’t going to try to trick anybody, but just see who can play defense.”

The UGA Athletic Association will once again team up with the Food Bank of Northeast Georgia during G-Day to host a canned food drive. Canned food donations will be accepted at Gates 2, 4, 6 and 9. The 2014 goal is 14,000 pounds.

The game will be televised live by CSS.