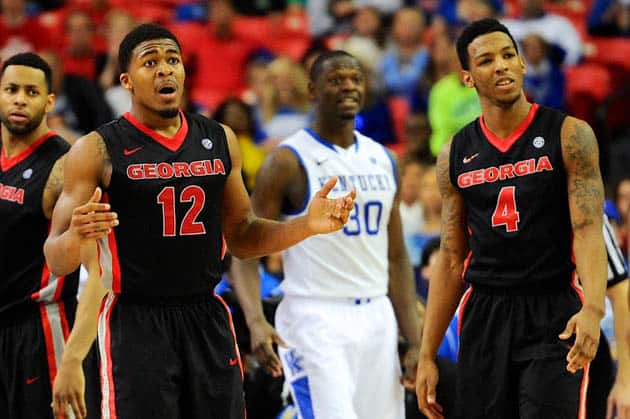 The Georgia men’s basketball team was eliminated in the SEC Tournament, falling to Kentucky 70-58 in the semifinals Saturday afternoon at the Georgia Dome.The Bulldogs were making their 13th program appearance in the SEC semifinals

Georgia was led by Kenny Gaines and Charles Mann who scored 13 and 12 points, respectively.

“Kentucky’s a really good basketball team,” said head coach Mark Fox. “To win the game we needed to play very complete basketball. We didn’t rebound it well enough and just couldn’t get enough stops in the second half to win the game.

“One thing I was pleased with today is that even though we played two games in 16 hours or whatever it was, I don’t think fatigue was factor at all. I was really pleased with how we bounced back with our energy.”

After a Gaines layup cut the Kentucky (24-9) lead to just 41-39 five minutes into the second half, Kentucky went on a three-minute, 12-4 run capped by seven points off offensive rebounds on three-straight possessions to take a 53-43 lead.

Gaines cut the deficit to 56-48 with eight minutes remaining in the game, but the Wildcats put together another 12-4 run to go up 16 points and secure its spot in Sunday afternoon’s final against No. 1 Florida.

Georgia (19-13) fought off Kentucky runs from the opening tip. The Wildcats opened the game on a 12-2 spurt, shooting 5-for-6 from the field during the four-minute span. Georgia, however, fought back with a 8-2 run midway through the half to bring the score to 19-15. After Kentucky constructed another run, the Bulldogs shrunk the deficit to just 36-32 when Thornton hit a short jumper as time expired in the half.

In the game, Kentucky held a plus-15 rebounding margin—the largest Georgia has conceded all year. Though Georgia had three fewer turnovers, Kentucky attempted 16 more shots during the game.

With today’s loss, Georgia was eliminated from the SEC Tournament and will now wait to learn its postseason fate on Sunday evening.

Worth Noting…
• Georgia’s starting line-up was Marcus Thornton (58th career start), Brandon Morris (43rd career start), Charles Mann (38th career start), Kenny Gaines (30th career start) and Donte’ Williams (90th career start).
• Today marked Georgia’s 13th SEC semifinal appearance.
• Kentucky is Georgia’s only opponent to have beaten them twice this season.
• The Bulldogs fall to 1-7 when being outrebounded by its opponent. Today’s –15 rebounding margin was the Bulldogs’ worst of the season.
• Today also marked only the third time that Georgia was outrebounded by a conference opponent this season.
• Georgia is now 4-5 in the SEC Tournament in the Mark Fox era
• Kentucky’s shot 56 percent from three-point range was the second-best a Georgia opponent has shot this season. (South Carolina, 57 percent)
The Series: Kentucky improves to 117-26 in the all-time series, including 9-1 in the SEC Tournament.