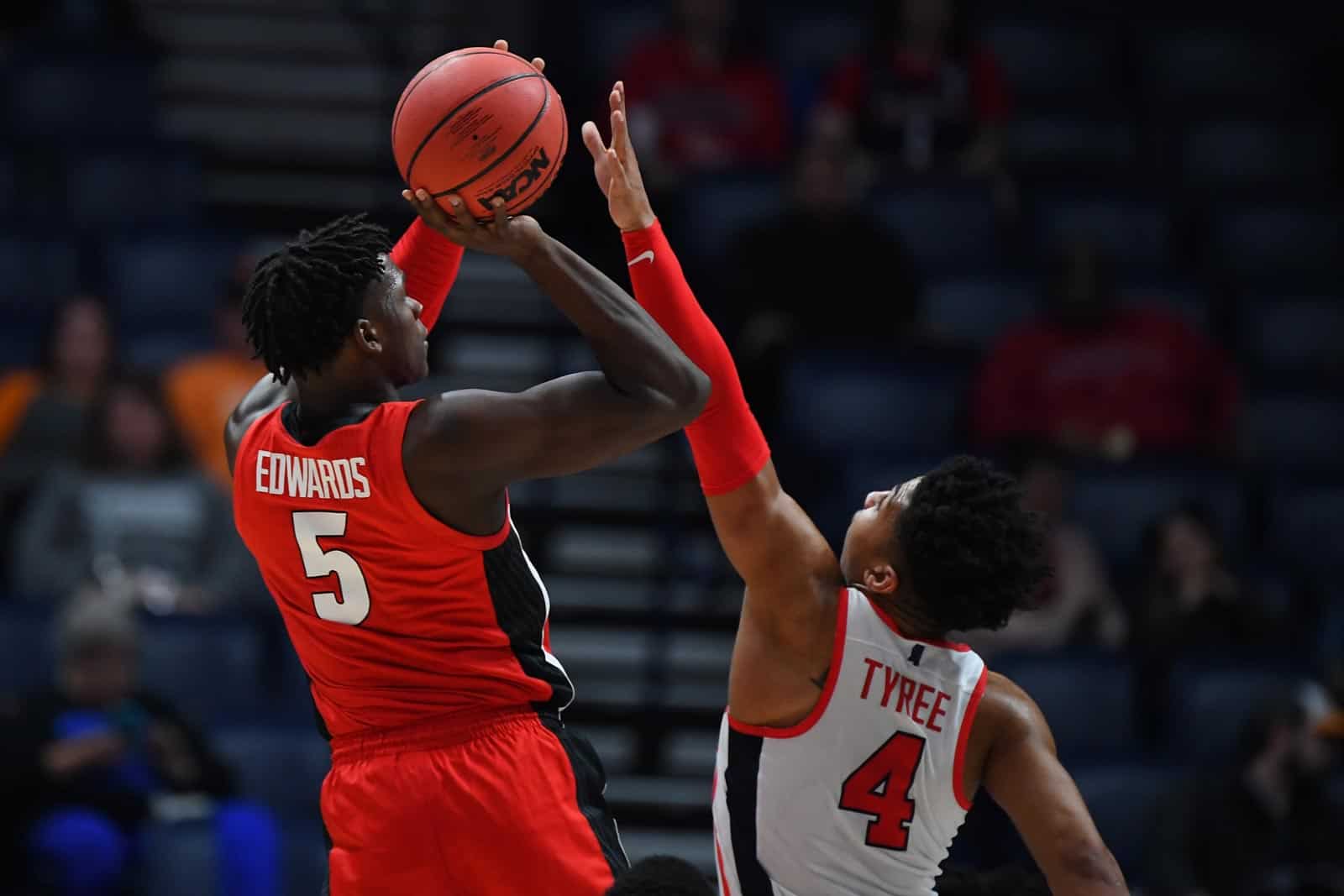 Nashville, Tenn. – The Georgia men’s basketball team defeated Ole Miss 81-63 in the first round of the SEC Tournament Wednesday night at the Bridgestone Arena.

Rayshaun Hammonds led the team in points with 22, including 11 rebounds to secure his sixth double-double of the season and eighth of his career. Jordan Harris was right behind Hammonds with 21, a season high for the senior.

Freshman Anthony Edwards passed Allan Houston of Tennessee, jumping into the SEC’s top-10 all-time freshman scorers. Edwards now sits at No. 10; six points shy of taking over John Wall’s No. 9 spot that he set in 2010.

“On the offensive side of the ball it’s all about the movement of the ball,” Head Coach Tom Crean said. “It’s everything about that. We settled for jumpers in the LSU game, can’t do that against anyone, let alone LSU. Today, the jumpers came because we were inside-out, five-six passes, we were four passes, and we made the next pass for the most part no matter what it was.”

In the first half, Georgia jumped out to a 12-4 lead that included a Hammonds three, and a Toumani Camara missed free-throw that was rebounded by Hammonds and quickly dished back to Camara for the score. A great defensive effort by Harris with a huge block set the tone defensively for Georgia. The Rebels quickly switched to a 1-3-1 zone that slowed down the Bulldog offensive attack but not for long as Georgia would go on an 11-0 run and held Ole Miss scoreless for almost six minutes including forcing six turnovers in that time. Ole Miss finally broke the drought after a Devontae Shuler lay-up. Tye Fagan got on the board after getting his first bucket to keep the Bulldogs out front. The Rebels would not stay quiet and go on a run of their own making five of their next six. Georgia would keep up the pace however, scoring four of four along the way including a 6-0 run to end the half capped off by a half court buzzer beater by Sahvir Wheeler to give Georgia a 41-30 lead going into the break.

The Bulldogs got off to another hot start to start the second half, rushing to an 8-2 run including Edward’s first bucket of the night. Georgia maintained a comfortable lead throughout the second half thanks in part to some Hammonds jumpers and a couple of dunks by Harris and Camara. Georgia’s defense held Ole Miss to another scoring drought of five minutes before some Breein Tyree free throws ended that. After the eight-minute media timeout, Ole Miss would go on an 8-0 run to cut the lead to nine. Edwards went one of two from the line to put the lead back at double-digits, and the Bulldogs would not let go from there. Georgia would end the game of a 6-0 run, making five of their last seven capped off with an Edwards alley-oop dunk from Fagan.

Georgia will make the quick turnaround to take on Florida on Thursday, March 12 at 3 p.m. ET with television coverage provided by SEC Network.