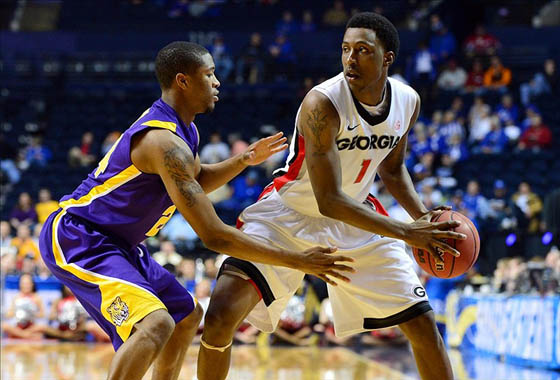 Georgia got off to a familiar slow start and fell to the LSU Tigers 68-63 in the 2nd round of the 2013 SEC Tournament in Nashville.

Georgia led only one time in the game at 2-0 and later fell behind by as many as 23 points. The Dawgs trailed 39-19 at halftime.

But the Bulldogs chipped away at the deficit in the 2nd half on the back of sophomore Kentavious Caldwell-Pope, the SEC Player of the Year as voted by the league’s coaches. Caldwell-Pope, who scored only seven points in the first half, racked up 25 in the second to finish the game with 32 points to go along with 13 rebounds.

Trailing 63-51, Georgia put together a 12-3 run to pull within 66-63 with 28.5 seconds remaining. After a timeout, the Dawgs ran a play designed for Caldwell-Pope, but he couldn’t get enough space and launched a three from well beyond the line. It didn’t go in.

“I didn’t shoot it straight up and down,” said Caldwell-Pope. “I was leaning a little bit on the shot. It was well contested and I [didn’t] create any space [to get an open shot].”

Kenny Gaines fouled Andre Stringer with seven seconds remaining, and his two free throws put the game away for the LSU Tigers.

“Certainly, a hard fought game,” said head coach Mark Fox. “I have to congratulate LSU. They came with a much more aggressive mentality to start the game and really had us on our heels and we really fought back courageously, but we just can’t wait that late in the game to start playing like that, and you’ve got to give their team credit and wish them well.”

Kentavious Caldwell-Pope also could have played his final game if he opts to enter the 2013 NBA Draft. If that happens, Georgia could be in for another mediocre year in 2013-14 without the bulk of their scoring.