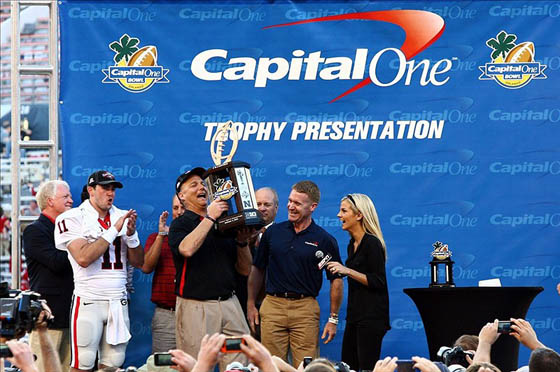 Aaron Murray threw five touchdown passes to lead the Georgia Bulldogs to a 45-31 victory over the Nebraska Cornhuskers in the 2013 Capital One Bowl.

The Bulldogs got off to a quick start in the first quarter after blocking a Nebraska punt. The Dawgs failed to recover the ball in the end zone, but did knock it out for a safety and a 2-0 lead. On their ensuing possession, Murray hit Arthur Lynch for a 29-yard TD.

Nebraska answered with a 14-yard TD pass and then promptly intercepted Murray on the next possession and returned it for a TD and a 14-9 lead. Murray then hit Tavarres King for a 75-yard TD to put the Bulldogs back on top 16-14.

In the second quarter, Todd Gurley rushed 24 yards for a touchdown to extend Georgia’s lead to 23-14. But the Cornhuskers answered with a field goal and a 16-yard TD pass to take a 24-23 lead into halftime.

Nebraska marched down the field to open the second half and scored a TD to make it 31-23. But the Bulldogs answered with a 49-yard TD pass from Aaron Murray to Chris Conley. Murray then hit Rhett McGowan for the 2-point conversion to tie the game at 31.

Later, on the first play of the fourth quarter, Aaron Murray completed a 24-yard touchdown pass to running back Keith Marshall to give Georgia a 38-31 lead. After forcing the Cornhuskers to punt on their next possession, Murray connected with Chris Conley again for an 87-yard TD to give Georgia a 45-31 lead.

Georgia finished with 589 yards of offense, which is also a new Capital One Bowl record. The Dawgs rolled up 427 yards through the air and 162 yards on the ground.

Todd Gurley led the Dawgs on the ground with 23 carries for 125 yards and a touchdown. Keith Marshall had eight carries for 36 yards and also caught a TD pass.

Chris Conley led all receivers with 136 yards on two receptions, both touchdowns. Tavarres King had three receptions for 104 yards, while Justin Scott-Wesley, Rhett McGowan, Keith Marshall, and Arthur Lynch each had three catches.

Georgia finishes the 2012 season 12-2 overall (7-1 SEC). This is third time the Bulldogs have won 12 games in a season, joining the 1980 National Championship team and the 2002 SEC Championship team.