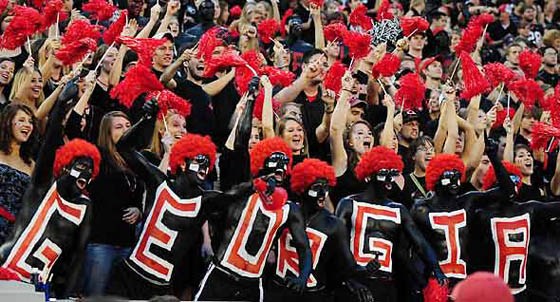 UGA band members, students, and the UGA Paint Line are calling for a blackout of the Georgia Tech football game tomorrow.

Fans are encouraged to wear black to the game, which kicks off at noon eastern on ESPN. The Dawg Walk begins at 10:15 a.m., and the Seniors will be honored on the field at 11:46 a.m.

Below is a message received from Michael Snell, a member of the UGA Redcoat Marching Band and UGA Battle Hymn Soloist:

First of all, I’d like to thank you for taking the time to read this. My name is Michael Snell and I am one of this year’s Battle Hymn Soloists, a tradition I’ve proudly been part of for 3 years – through the good, the bad, and the ugly that has defined Georgia Football in these last few seasons.

In recent seasons, students and fans alike have taken the initiative to organize unofficial ”Blackouts,” sporting the black half of the Red and Black in a spirited effort to express the pride we have in our team and university which unites the entire Bulldog Nation.

While I understand that some of our fans are superstitious of this ”tradition,” I believe it’s important to recognize that correlation does not imply causation – our team doesn’t win or lose because of the colors of fans’ clothes. And, if anything, this show of spirit further ignites the game day atmosphere in Sanford Stadium.

In the media, Dawg fans never get the pleasure of hearing about how intimidating their stadium is – how difficult it is for an opposing away team to succeed in such an ”electric” environment.

I don’t know what the remainder of this season has in store, but any respectable Bulldog fan should know the stakes are high. And at this point in the season, anything can happen. This weekend, we expect our players to give it their all. It’s time for our fans to do the same.

It’s time to blackout. If our fans can pull together and proudly sport that menacing black, then I will too.

And here is a message from Bulldog fan. Micah Shue:

On Saturday November 24th, there will be a burial at Sanford Stadium. The ceremony will be held for the death of the Georgia Tech football program. In support, we humbly ask every Dawg fan to wear BLACK.

Come BLACKOUT Sanford Stadium for the last home game of the year as we send off the dawgs to the SEC Championship game and possibly on to the National Championship game. Come to the game loud and proud and wearing BLACK on BLACK.