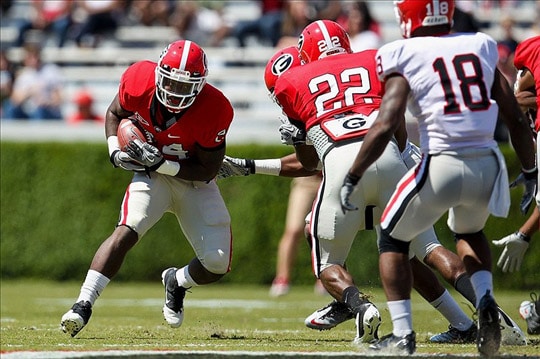 The Red team defeated the Black team 32-31 in the 2012 Georgia Bulldogs G-Day game this afternoon at Sanford Stadium before an announced crowd of 44,117.

Quarterback Aaron Murray completed 7 of 17 passes for 112 yards and one touchdown, a 33-yard strike to Tavarres King. Backup Hutson Mason was 5-of-8 for 62 yards. He also threw a 7-yard touchdown pass to Rhett McGowan.

Redshirt freshman Christian Lemay tossed a 66-yard touchdown to tight end Jay Rome with 59 seconds left in the game to cut the Red’s lead to 32-31. A two-point conversion failed. Lemay finished the day 7-of-10 for 154 yards and one TD.

Running back Richard Samuel led all rushers with 43 yards on 8 carries and one touchdown for the Black team. Ken Malcome carried the ball 8 times for 32 yards and two TD’s.

Linebacker Ramik Wilson of the Red team was the star on defense. He led both teams with seven tackles, including an interception returned 19 yards, a sack, and a tackle for loss.