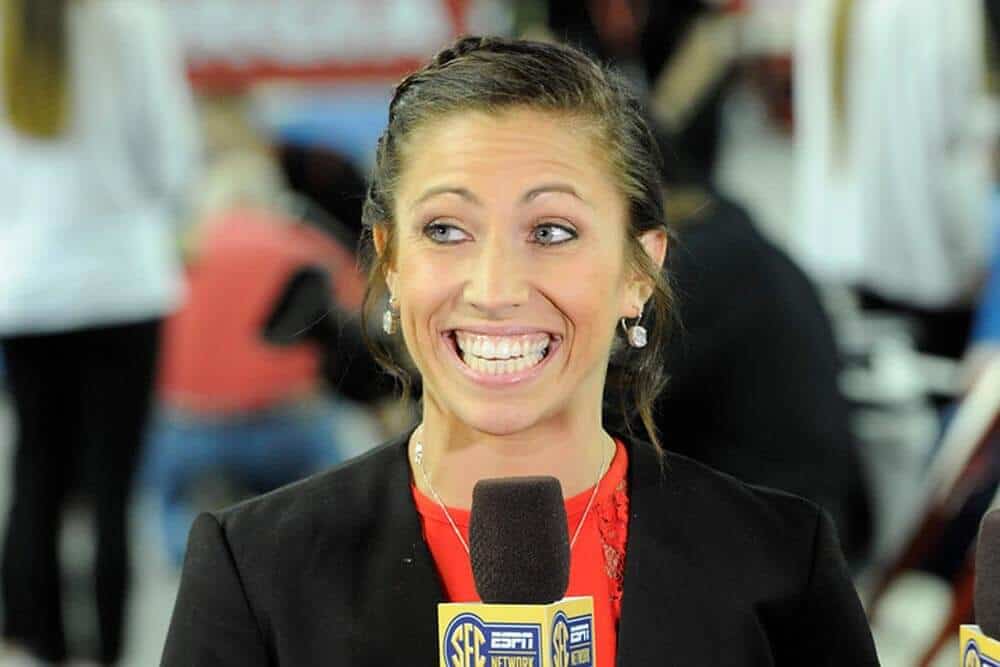 ATHENS, Ga. – Former University of Georgia gymnast Courtney Kupets Carter, regarded by many as the most accomplished gymnast in collegiate history, has been named head gymnastics coach at her alma mater according to an announcement Tuesday by UGA J. Reid Parker Director of Athletics Greg McGarity.

“Courtney was a remarkable gymnast and leader on a team that won four national championships,” said McGarity. “She knows the heritage of our program and what it takes to compete at the highest levels. While she comes with national and international competition experience and a national name, she also brings a passion for her sport, her University, the Georgia gymnastics program, and a commitment to the ‘G.’”

Inducted into the USA Gymnastics Hall of Fame in 2014, Coach Kupets Carter announced that former legendary head gymnastics coach Suzanne Yoculan Leebern will join her initial staff as a volunteer coach. Ironically, Kupets Carter is following a similar early career path as Yoculan Leebern who was hired in 1983 from a club team in Pennsylvania. Suzanne had no prior college coaching experience but retired in 2009 after winning 10 national championships, 16 SEC titles, and five national Coach of the Year awards.

“I’d like to thank Greg McGarity, President Morehead, and the Athletic Association for this remarkable opportunity to lead the Gym Dogs,” said Kupets Carter. “As a former Gym Dog, I’m thankful for the experiences I had that contributed to the incredible history of Georgia Gymnastics. Now as Head Coach, I am excited to lead the program into the future. I’m extremely passionate about building on the Gym Dogs’ tradition of excellence and winning philosophy. I am appreciative of the support that will enable our student- athletes and the program to reach their full potential. It’s an honor to be back home in Athens, in a community that supports the Gym Dogs with such enthusiasm. GO DAWGS!”

Kupets Carter capped her gymnastics career in 2009 in spectacular fashion. The team won its fifth straight NCAA title, and she won the all-around, bars, beam and floor individual competitions. Kupets Carter received the Honda Broderick Cup as the country’s top female student-athlete in all sports and the Sportswoman of the Year Award from the Women’s Sports Foundation.

She became the first gymnast to win a national title in every event and received five First Team All-America honors. Kupets Carter was chosen as the Honda Award winner for gymnastics as well as the AAI National, NCAA Southeast Regional and Southeastern Conference Gymnast of the Year. She also was named the SEC’s Female Athlete of the Year for all sports. Kupets Carter was a National Honor Society member, was chosen as ESPN The Magazine First Team Academic All-American and was a recipient of NCAA and SEC postgraduate scholarships.

She has been working as an SEC Network gymnastics analyst since 2015 and also teaching at the Oconee Gymnastics Club this past year. She is married to Chris Carter and they have one daughter, Brooklyn, 17 months. They are expecting their second child in July.

“First, I would like to thank Greg McGarity for selecting Courtney Kupets Carter as the new head coach. He chose a highly successful gymnastics competitor, but more importantly he hired one of most mentally tough athletes I’ve ever had the honor of coaching. This exceptional quality will serve her well as she embarks on this new and exciting challenge.

“I’m thrilled for Courtney and her family as she becomes the next face of Georgia Gymnastics. She’s worn the Georgia leotard, competed on 4 NCAA Championship teams, and has completely embraced the competitive culture that has brought so much success to the University of Georgia through the years.

“Courtney is a determined, instinctive, and tireless worker. She will set an exceptional example for her athletes, staff, and university. I respect her honesty, adore her fiesty personality, and appreciate her thoughtfulness. I am certain she will be an inspirational leader in and out of the gym.

“Despite all of her honors and accolades, Courtney has always remained humble…and because of this, I am confident that this journey will be about the athletes, the fans, and the incredible legacy of the University of Georgia Gymnastics program.”