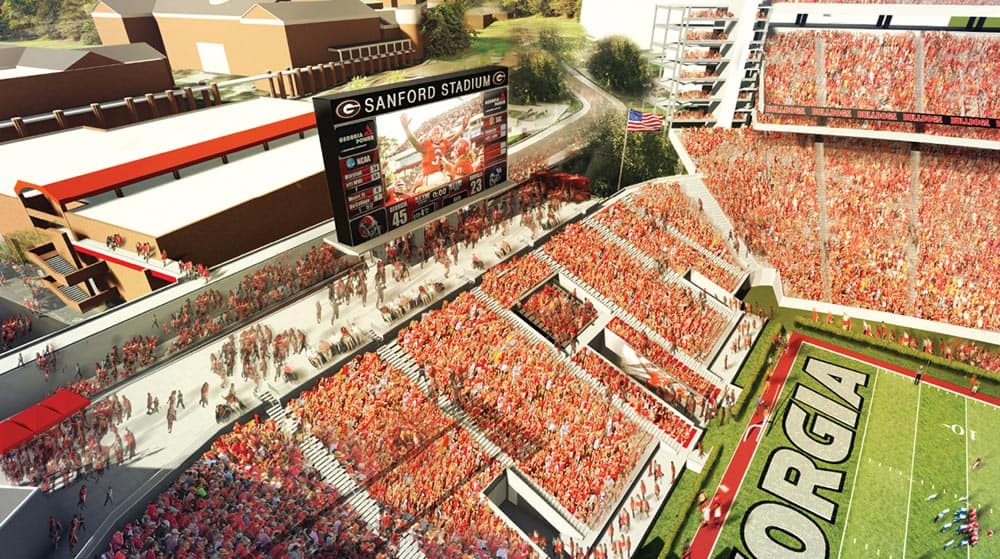 ATHENS, Ga. – A major enhancement to the west end zone of Sanford Stadium — 120,000 square feet of new and improved space that will include a new locker room for the Bulldogs, room to host and entertain prospects on game day, a larger video board and a new plaza for game day fans — was approved by the University of Georgia Athletic Association Board of Directors during its quarterly meeting here Tuesday.

The construction project, which is expected to take approximately 17 months to complete, is estimated to cost $63 million. In order for the enhancements to be ready for the 2018 football season, initial work needs to begin by April of 2017, according to J. Reid Parker Director of Athletics Greg McGarity.

‘’The West End Zone project is the next step in the enhancement of Sanford Stadium,’’ McGarity said. ‘’This project is unique to Georgia and to Sanford Stadium. It really focuses on the locker room and the recruiting space, which will be usable by so many units of the university at certain times. It also covers many areas of fan amenities: rest rooms, concession points of sale opportunities. I think for those of us that lived through Reed Alley in its original form — and now Reed Plaza — they can see what a tremendous impact it has had on the fans’ experience. I believe that this project will have a similarly positive effect on the fans that enter Sanford Stadium from the west end.’’

The Georgia football team currently occupies a dressing room at the opposite (east) end of Sanford Stadium, and the Bulldogs use it only as a staging room for pre-game, halftime and post-game activities. When completed, the new dressing room at the west end will offer fully-equipped locker and shower facilities for the Bulldogs, nearly doubling the amount of available square footage.

Directly above the new locker room will be a hospitality lounge, covering over 10,500 square feet, used exclusively for hosting prospects and their guests on game days. The lounge will be the first of its kind at Sanford Stadium for the Georgia football program.

The new plaza — replacing all existing entrances into the stadium’s west end — will offer fans a dramatically improved game-day experience.

Some details of the overall project include:

‘’(Regarding fundraising) I think we’ve just scratched the surface,’’ McGarity said. ‘’Our fans have been fantastic. We have 16,000 season ticket holders, and there are naming opportunities, both in the Indoor Athletic Facility, and also these new areas at Sanford Stadium. So I think there’s tremendous upside to what could be a once-in-a-lifetime chance for naming opportunities that will be available at Sanford Stadium.’’

Further details on the West End Zone project, including artist renderings and fundraising information, can be found at the following website:

The project will now be presented for discussion by the University System of Georgia Board of Regents at its meeting on March 15 in Atlanta.

Other highlights of the Athletics Board meeting included the following:

• McGarity announced that over $36 million was raised through the Magill Society, which was launched in September of 2015 and now includes over 475 donors.

• Construction projects approved at the Athletics Board meeting in the spring of 2016 — improvements to Stegeman Coliseum, the Boyd Golf Center and the Jack Turner Soccer Complex — remain on schedule and on budget. Additionally, constructions projects in the near future include the resurfacing of Spec Towns track and the building a second video control room to maintain compliance with requirements of SEC and ESPN broadcasting standards.

• A glowing academic report from Faculty Athletic Representative David Shipley. UGA student-athletes compiled an overall GPA of 3.06 for Fall Semester 2016, their highest-ever for a fall term.