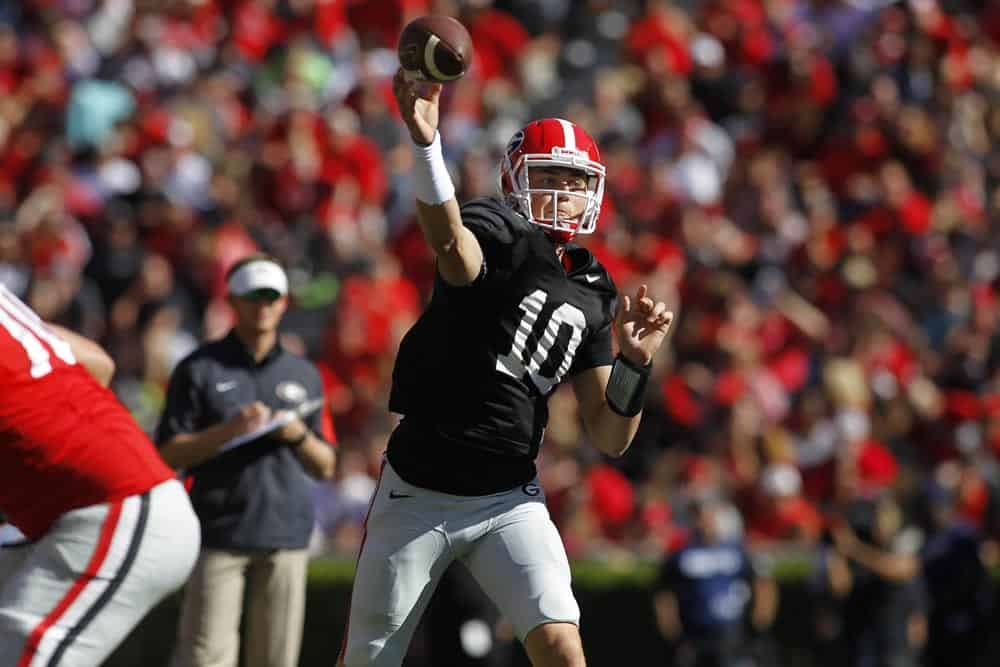 Tae Crowder rushed for two touchdowns and Aaron Davis returned an interception 98 yards for another as the Black team defeated the Red team 34-14 in the annual G-Day Game on Saturday. A record 93,000 fans attended the game at Sanford Stadium.

The 93,000 fans almost doubled Georgia’s previous G-Day attendance record of 46,815 set in 2015. Georgia-native and notable rapper Ludicras performed just before the teams ran onto the field on a stage behind the East end zone.

“[It’s] A special moment to know that the fan base has your back and has got your programs’ back,” head coach Kirby Smart said. “But they came and they came in groves and I appreciate that. Our kids appreciate that…It speaks volumes for where Georgia is heading and what Georgia can do…What a great atmosphere to come out and compete in. I can’t say enough about our fan base and what they were able to do.”

Georgia’s quarterbacks rotated in on both sides of the ball. Freshman Jacob Eason went 19-29 for 244 yards and a touchdown exclusively for the Red team, while Brice Ramsey finished 16-25 for 224 yards for both teams. Greyson Lambert posted an 11-22 outing for 140 yards on both sides, and Nick Robinson added a 5-7 line with 49 yards and a touchdown.

“We tried to balance out the quarterbacks and they came out almost dead even,” Smart said. “I thought all three of those kids competed hard. They communicated well in the hole…They did a good job in executing the offense.”

Crowder and Sony Michel carried the load for the Black squad, combining for 14 carries and 67 yards, a 4.8 average per carry. On the opposite side, Shaquery Wilson led the Red team with nine carries for 24 yards and a touchdown, while Brendan Douglas contributed three carries for 13 yards.

Defensively, sophomore D’Andre Walker led the Black squad’s pass rush with four sacks for a combined loss of 27 yards. Juwan Taylor led the Black team in tackles with seven, while Aaron Davis added three and the interception for a touchdown. The Red team was led by Reggie Carter with six tackles and Quincy Mauger with five tackles and a pass breakup.

“We’ve got to get more physical up front on defense,” Smart said. “I think it hurts us to have some guys out on the defensive line. I think we are going to run better and run the ball better.”

The Red team marched on a 12-play drive late in the half and an Eason-to-Nauta touchdown connection narrowed the score to 13-7 with 33 seconds remaining.

Nick Robinson led the Black team to a scoring drive early in the second half, capping the drive with a four-yard pass to fullback Christian Payne. Leading 20-7 and with the Red team driving, Davis picked off the Lambert pass at his own two-yard line and returned it all the way for the 27-7 lead.

Wilson ran in a touchdown from seven yards early in the fourth, but the 27-14 deficit was as close as the Red team would come. Crowder added his second touchdown midway through the fourth quarter to cap the scoring and finish off the 34-14 victory.