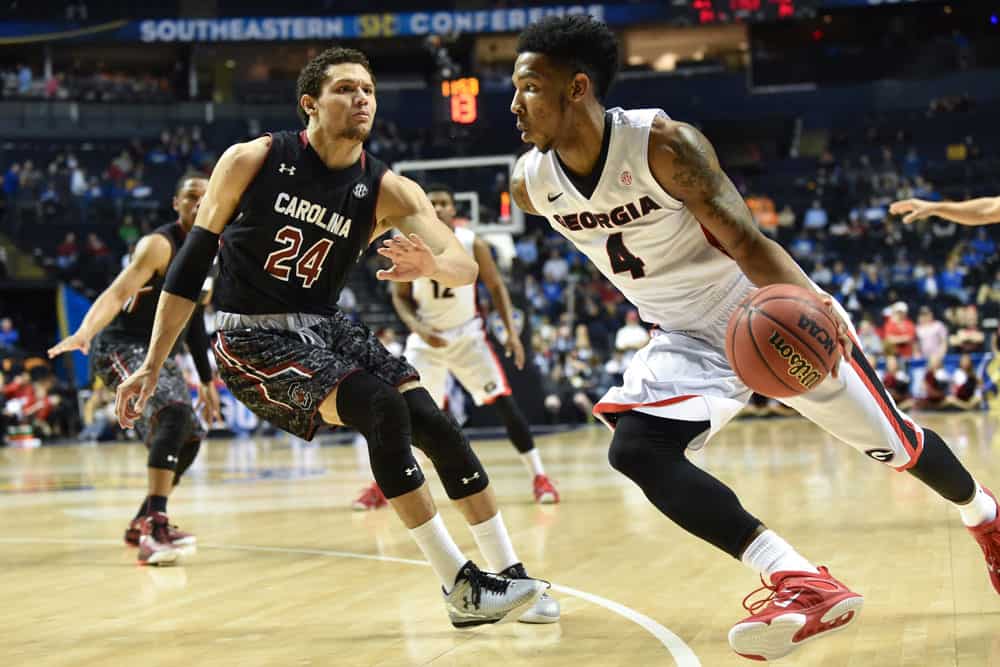 ATHENS, Ga. – The Georgia Bulldogs defeated the South Carolina Gamecocks 74-62 in the quarterfinals of the SEC Tournament on Friday night to advance to the semifinals for the second-consecutive year.

Freshman Yante Maten recorded the first double-double of his career to help propel Georgia (21-10, 12-7) over South Carolina (17-16, 6-13). The Bulldogs had lost the previous two matchups against South Carolina in the regular season by a combined 23 points.

Maten finished with 13 points and 10 rebounds, each career highs, on 5-of-8 shooting. Marcus Thornton led the Bulldogs with 15 points and added eight rebounds before fouling out in the second half. Charles Mann and Nemanja Djurisic each finished in double figures, totaling 12 and 11 respectively. Kenny Gaines returned to the lineup for the Bulldogs after missing the Alabama game. He finished with nine points, all off of 3-point shots.

“We’re an experienced team and all of that experience really helped us tonight,” Georgia head coach Mark Fox said following the game. “That was really key for us. We’ve had a lot of different guys that have played a lot of minutes for us this season, so we were pretty poised there at the end. Marcus has been the heart and soul of our team and the guys that were on the court didn’t want to disappoint him. He’s been such a great leader for us. We were disappointed that he fouled out but we finished.”

Georgia started the game 10-of-18 from the field in the first 13 minutes of play to take a six-point lead over the Gamecocks at the under-eight timeout. Both teams got off to hot starts from the field, despite there being only one lead change in the first 13 minutes, the game was tied on three occasions and Georgia’s six-point lead was the largest of the half to that point.

After starting the game 6-13 from the field, South Carolina went cold after the under-eight timeout, failing to hit a field goal from the 8:04 mark until the 3:08 mark. Over the stretch the Gamecocks missed six consecutive shots. The Bulldogs finished the last 6:19 of the first half without making a field goal, but were still able to take a 33-26 lead into halftime.

South Carolina tied the game up at the 13:54 mark for the first time since the 12:16 mark in the first half. The Gamecocks stormed back with a 13-2 run that was primarily fueled by the play of Duane Notice, who scored 11 points in the first 6:06 of the second half.

The Gamecocks opened the second half shooting 5-of-6 from the field, including 3-for-3 from beyond the arc, meanwhile, the Bulldogs started just 2-of-10 from the field after shooting 49 percent in the first half. Georgia failed to make a field goal from the 18:26 mark to the 9:06 mark of the second half. The Bulldogs were also held scoreless for just over four minutes during that stretch. Djurisic ended Georgia’s field goal drought with a 3-pointer that gave the Bulldogs a 50-47 lead.

After Thornton fouled out with just under four minutes to go, Maten gave the Bulldogs a five point lead on a dunk assisted by Gaines. South Carolina and Georgia exchanged baskets on their next possessions, until Michael Carrera drew a foul on an offensive rebound opportunity, which allowed him to hit a free throw to cut the lead to four with 1:36 remaining.

On an inbound for South Carolina following a missed free throw, J.J. Frazier tipped the pass, which was then stolen by Gaines and passed back to Frazier who laid the ball in to give Georgia a 67-61 lead with just under 1:30 remaining. Frazier then launched a 3-pointer from beyond NBA range with just two seconds on the shot clock and drained it with 41 seconds on the clock to punch Georgia’s ticket to the SEC semifinals.

Notice led all scorers with 20 points, 16 of which came in the second half. Sindarius Thornwell and Laimonas Chatkevicius each finished with 10 points for the Gamecocks.

· This was the 105th all-time meeting between Georgia and South Carolina, and the third matchup of the season. Georgia leads the series 55-50.

· South Carolina won the two regular season meetings between the two schools, beating Georgia 67-50 in Columbia on January 31, and then 64-58 on February 17 in Athens.

· The Bulldogs led for only 57 seconds combined during the first two meetings between the schools, but led for 15:19 of the first half in Friday’s game.

· Yante Maten tied a career high with 13 points, and registered a career-high 10 rebounds for his first career double-double.

The Bulldogs will face off against the second-seeded and No. 21 Arkansas Razorbacks in the SEC semifinals on Saturday at 3:00. Arkansas one the only regular-season matchup between the two schools 79-75 in the SEC opener in Athens on January 6. The game will air on ESPN.