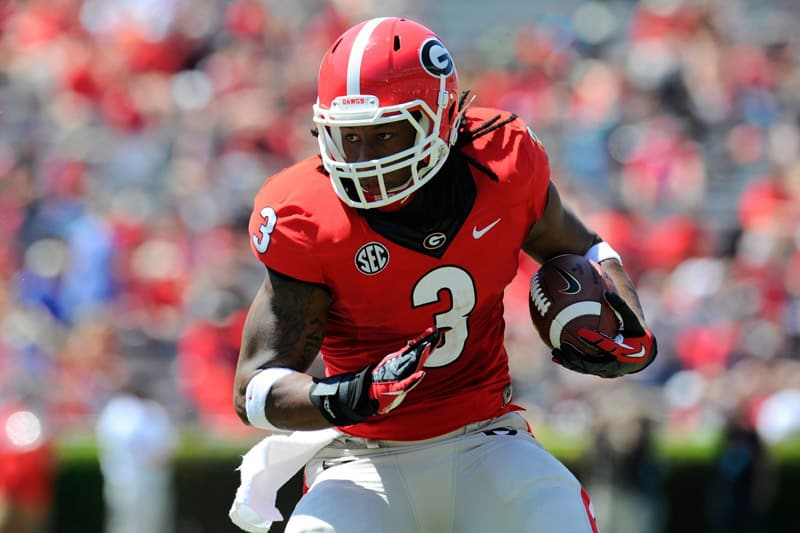 Todd Gurley has been suspended a total of four games by the NCAA for accepting over $3,000 for autographs, the NCAA announced today.

UGA is appealing the four-game suspension and the NCAA will review the case this week.

If the appeal is denied, Todd Gurley will not be eligible to play until their Nov. 15 home game against Auburn. Gurley must also donate to charity and complete 40 hours of community service.

Here is the release from the NCAA:

Todd Gurley, University of Georgia football student-athlete, must sit a total of four games, or 30 percent of the season, for accepting more than $3,000 in cash from multiple individuals for autographed memorabilia and other items over two years. Gurley, who acknowledged violating NCAA rules, must repay a portion of the money received to a charity of his choice and complete 40 hours of community service as additional conditions for his reinstatement. Gurley will be eligible to play on Nov. 15.

In determining the appropriate reinstatement conditions, a 30 percent withholding condition is consistent with precedent in similar cases. Additional withholding was strongly considered because the violations occurred over multiple years with multiple individuals and the student received extensive rules education about the prohibition of receiving payment for autographs. However, the university’s due diligence in its investigation and the student’s full disclosure of his involvement in the violations were factors in not imposing a more severe withholding condition.

The university indicated it will appeal the decision. A membership committee which oversees the reinstatement process will review the appeal this week. The committee can reduce or remove the conditions the staff has imposed, but cannot increase them.

On Wednesday, Oct. 22, Georgia released a statement indicating they were submitting the necessary paperwork for Gurley’s reinstatement and that they hoped and expected a “prompt ruling by the NCAA so that Todd, his coaches, and teammates can adequately prepare for our next game.”

Todd Gurley was suspended indefinitely on Oct. 9 for an alleged NCAA rules violation. It was then learned that Gurley had been accused of accepting money for autographs by a memorabilia dealer and that dealer had been shopping the story to various outlets. The next day, ESPN named the memorabilia dealer as Bryan Allen.

UGA has issued the following statement…