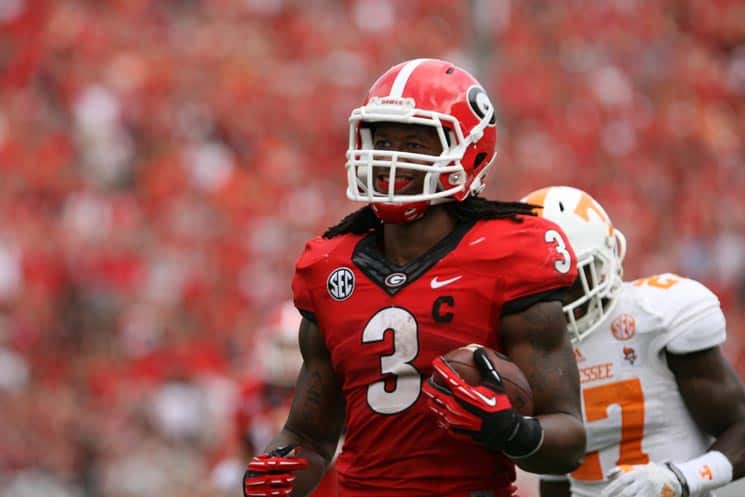 Tailback Todd Gurley has been suspended for an alleged violation of NCAA rules, UGA announced this afternoon.

“I’m obviously very disappointed,” said UGA head football coach Mark Richt. “The important thing for our team is to turn all our attention toward preparation for Missouri.”

UGA has not released any additional information, so we can only wonder what the alleged violation is. More than likely, it has something to do with compensation or autographs.

Back in 2010, wide receiver A.J. Green was suspended four games after it was found he sold his 2009 Independence Bowl jersey to an individual the NCAA deemed to be an agent.

At this point, it doesn’t look like Gurley will play Saturday against Missouri unless UGA can investigate the matter quick enough.

With Gurley likely out for Missouri, Georgia will have to lean on Nick Chubb and Brendan Douglas. Sony Michel and Keith Marshall remain out with injuries.

6:10pm ET
Bruce Feldman of FOX Sports reports that “the investigation is looking into whether Gurley accepted extra benefits for his likeness with memorabilia brokers.”

6:15pm ET
Seth Emerson of Macon.com reports that “the investigation involved whether Gurley received money in exchange for his autograph or use of his likeness.”

7:08pm ET
Athens Banner-Herald reports the same and has some quotes from a source in the memorabilia industry.

SI.com has learned that a person confirmed to Georgia’s compliance office this week that he paid Gurley $400 to sign 80 items on campus in Athens, Ga., one day this past spring. The person claimed to have a photo and video of Gurley signing the items, but neither the photo nor the video showed money changing hands. NCAA rules require schools to immediately declare a player ineligible if they discover a violation has been committed. Schools may then apply for the player’s reinstatement. Reached by text message on Thursday afternoon, Georgia athletic director Greg McGarity declined comment.

8:35pm ET
TMZ reports that the alleged video of Gurley signing autographs is being shopped and that Gurley received around $2000.

11:30pm ET
SBNation reports that the autograph dealer has been trying to get Gurley suspended since Sept. 30 when he sent them an email.