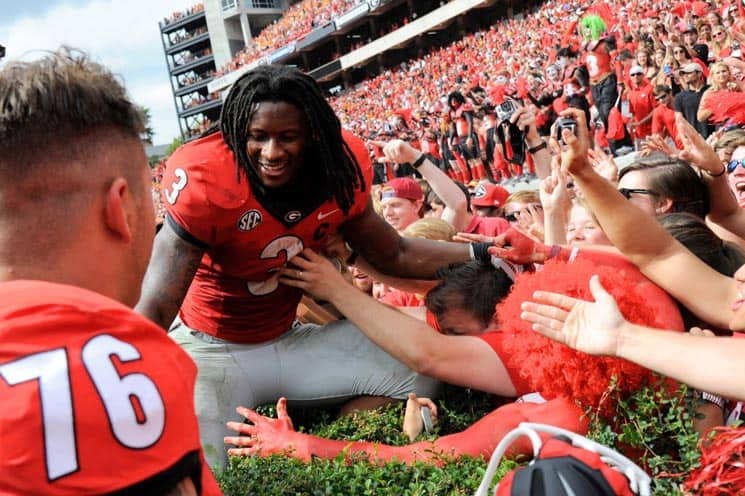 ESPN has identified and named the memorabilia dealer in the Todd Gurley investigation as Bryan Allen of Villa Rica, Georgia.

Atlanta attorney Ed Garland has been hired by Bryan Allen, and Garland confirmed that to ESPN.

“I do represent Bryan Allen,” Garland said. “He’s not going to be making any statements. Really, I have nothing else to say.”

Todd Gurley was suspended indefinitely by UGA on Thursday after allegations arose that he signed items for memorabilia dealers in return for payment.

The amount of money Gurley received is speculated to be anywhere from $400 to over $10,000. NCAA rules stipulate that Gurley would face a potential one-game suspension if he accepted improper benefits ranging from $100 to $400. The penalty would increase to two games for benefits from $400 to $700, and to four games for amounts greater than $700.

ESPN also reported that they received the same email from Bryan Allen that SBNation received on Sept. 30. Here is more info on that from ESPN:

On Sept. 30, Allen, whose last known address was in Villa Rica, Georgia, sent an email to ESPN and several other media outlets, in which he claimed to possess “video of Todd Gurley doing a private autograph signing from last [March].”

Allen included his name in the email and a cell phone number that was recently issued to him.

“He has been paid thousands of dollars for his stuff over the last 18 months,” Allen wrote in the email. “I personally paid him for the signing on the video. I have bought and sold game used equipment from him.”

In the email, Allen claimed he didn’t want to be compensated for releasing the video or photos of Gurley signing memorabilia. A photo Allen attached to the Sept. 30 email shows an African-American male, who closely resembles Gurley, signing a mini UGA helmet inside a car. The man is shown autographing the helmet with his left hand; Gurley is left-handed.

Allen wrote in the email that he recently sold the mini helmet on his eBay store and that the video didn’t “show the money exchange.”

“All I ask for is privacy,” Allen wrote. “I live [in] Georgia and would be crucified if my name was released.”

Attempts to reach Allen on Friday were unsuccessful. A woman who answered the phone at one of his last known addresses said he no longer lived there, but would get a message to him. A couple of hours later, a man called an ESPN.com reporter’s phone from a blocked telephone number advised the reporter to contact Garland.

A source familiar with the investigation confirmed that Allen once owned a sports memorabilia store near Rome, Georgia, which closed within the last year.

Bryan Allen used to own a memorabilia store in Rome, Georgia called “Players.”