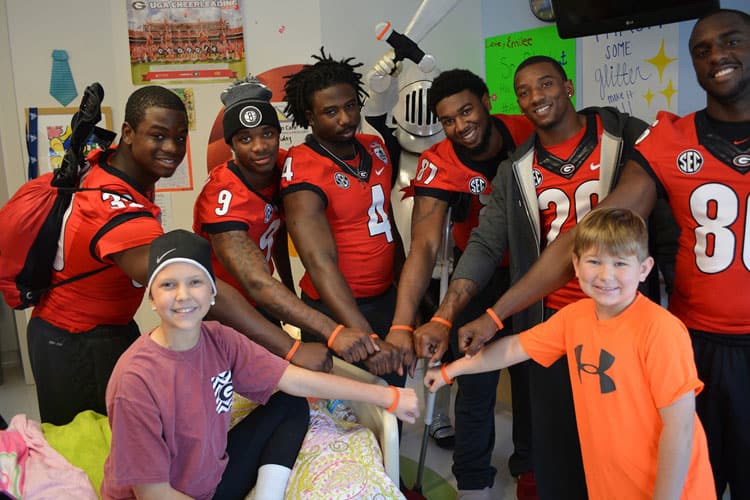 Mitchell tore the ACL in his right knee when he came down wrong after jumping to celebrate Todd Gurley’s 75-yard touchdown run early in the first quarter.

After rehabbing the knee, Mitchell was ready to go for Spring practice. However, he injured his left leg in practice and missed the remainder of Spring ball.

Then in late July, Mitchell encountered yet another setback. While running routes with teammates, he suffered another injury to his right knee. He underwent an arthroscopic procedure and hasn’t been seen on the practice field since then.

That is, until yesterday. Malcolm Mitchell and teammate Justin Scott-Wesley both jogged on the sideline as the Bulldogs began their first practice since defeating No. 16 Clemson 45-21 on Saturday.

Georgia offensive coordinator Mike Bobo said the pair could play, but likely not if the Dawgs had a game this weekend.

“There is an outside chance, but I think it’s still too early to tell,” Bobo said. “Right now, I would say no, but the first of next week could change some things.”

Scott-Wesley tore the ACL in his right knee last season at Tennessee. He had been practicing, but then suffered an ankle sprain in preseason practice.

Justin Scott-Wesley, a junior, has caught 22 passes for 446 yards and three touchdowns during his tenure in Athens.