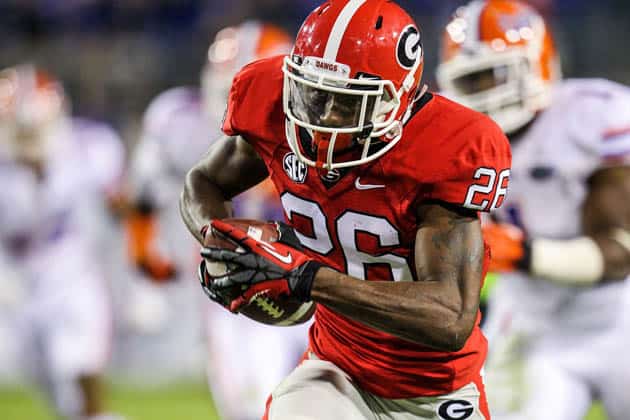 UGA senior wide receiver Malcolm Mitchell, who tore the ACL in his right knee last season, will miss the remainder of the Spring after injuring his left leg.

According to the release from UGA, Mitchell had begun “…limited work during practice following ACL surgery last fall and is still expected to have a full recovery by August pre-season practice. according to Ron Courson, Sr. Associate Athletic Director and Director of Sports Medicine.”

“I don’t think it’s related (to pushing himself too much),” said head coach Mark Richt today. “We’re trying to keep it vague. But the good news is we think he’ll be ready by the summertime to be working and be 100 percent by the time camp starts. A lot of times the big question is are that going to happen or not. We don’t think it will cost him the season at all or even any camp for that matter.”

Mitchell (6-1, 190) tore his ACL last year in the season-opener against Clemson. He started the game, but injured himself jumping up to celebrate Todd Gurley’s 75-yard touchdown run early in the first quarter.