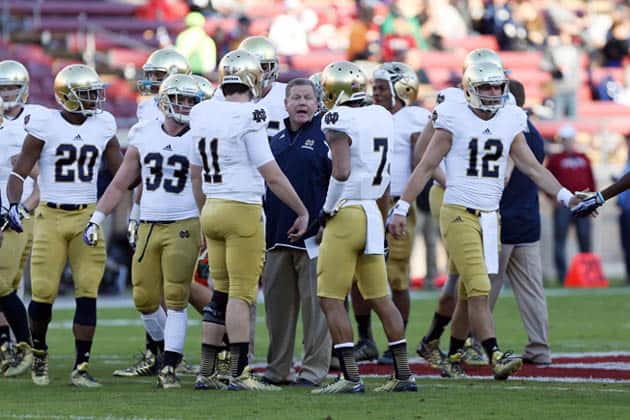 Update: Georgia has announced a home-and-home football series with Notre Dame for 2017 and 2019.

According to legendary UGA quarterback Buck Belue, an announcement for the rumored Georgia-Notre Dame home-and-home football series will be made within the next 24-48 hours.

Back in April, Jeremy Fowler of CBSSports.com first broke the news on the possible series. At that time, UGA athletics director Greg McGarity acknowledged that there had been discussions on a series.

“I think it’d be great for the University of Georgia if we were able to make it happen,” McGarity said.

Then at the SEC Spring meetings in Destin last month, McGarity told Seth Emerson that they were moving closer to finalizing an agreement.

“I think it’s an opponent we’ve played, what, one time? 1980? For our fans to be able to go up to South Bend, and for our fans to see Notre Dame play between the hedges, I think from a national perspective it’d be off the charts, as far as interest, as far as intrigue,” McGarity said. “That would be something out of the ordinary that our fans would be very, very excited about.”

Georgia and Notre Dame’s only meeting on the football field was in the Sugar Bowl on January 1, 1981. The Bulldogs defeated the Irish 17-10 in that game to claim the 1980 National Championship.

Georgia has not announced a new non-conference match-up in almost three years. But now that the SEC has settled on the new future schedule format, the Bulldogs should begin to add games again.

Buck Belue received the UGA-Notre Dame news this morning on Bulldog Roundtable when he spoke with Mike Cavan, Special Assistant to Greg McGarity, about scheduling.

“I think they’re (the SEC) mandating that, that you have to play a power conference. Now at the same time, I think it puts us in a little bit of a box too, ” Cavan said. “I think our people would like to see us play some big name schools across the country, and we’re working on that…right now. In fact, there will be an announcement in the next couple of days about a possible big series that’s fixing to happen for us.”