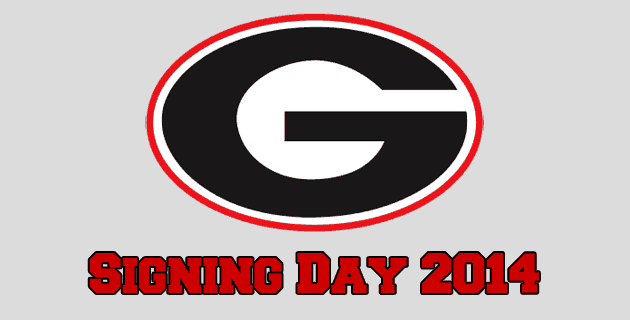 Wednesday, February 5 is National Signing Day 2014. The Georgia Bulldogs are once again expected to sign a Top 10 class.

Mark Richt and the Georgia Bulldogs currently have 18 verbal commitments. Georgia’s 2014 class is currently ranked 7th by Rivals.com, 8th by 247Sports, and 11th by Scout.com.

The Dawgs are hoping to land a few of their big-time uncommitted targets:

Of those six, Lorenzo Carter may be the most likely to sign with the Dawgs. Carter took a last-minute official visit to UGA this weekend and was reportedly blown away.

As we do each year, Sicemdawgs.com will post the 2014 Georgia Bulldog signees as they come in. We will also update this post throughout the day (see “Live Signing Day Updates” below). Feel free to join the signing day discussion in the comments section at the bottom.

8:00am – Wide receiver Gilbert Johnson of Miami, FL has faxed in his NLI to UGA.

8:17am – WR Shakenneth Williams of Macon, GA and OL Isaiah Wynn of St. Petersburg, FL have officially signed with UGA.

8:20am – Four-star wide receiver Isaiah McKenzie has committed to UGA! McKenzie is a teammate of Sony Michel, a UGA running back commitment.

8:20am – Tight end Jeb Blazevich of Charlotte, NC has officially signed with UGA.

8:25am – Cornerback Shaq Jones, who flipped from Louisville this week, has signed with the Dawgs.

8:29am – JUCO DB Shattle Fenteng of Loganville, GA has faxed in his LOI to Georgia.

8:40am – Defensive lineman Kendall Baker has signed with UGA.

8:46am – Georgia has received LOI’s from running backs Nick Chubb and Sony Michel.

9:20am – WR Rico Johnson of Swainsboro, GA has sent in his NLI to UGA.

10:00am – UGA commitments that have yet to send in their NLI’s: TE Hunter Atkinson, DL Lamont Gaillard, DB Malkom Parrish, OL Dyshon Sims.

10:10am – Georgia OC Mike Bobo said on GeorgiaDogs.com that Isaiah McKenzie will be given the opportunity to be the primary kick and punt returner for the Dawgs.

10:25am – West Hall TE Hunter Atkinson, who flipped his commitment from Cincinnati today, is now officially a Georgia Bulldog.

10:33am – DL Lamont Gaillard of Fayetteville, NC is now officially a Georgia Bulldog. That makes 18 signees for the Dawgs.

11:08am – UGA target Elisha Shaw has committed to Alabama.

11:08am – Mark Richt is addressing the crowd at Butts-Mehre. He introduced the new defensive coaches Jeremy Pruitt, Kevin Sherrer, and Tracy Rocker. Says 4th coach will be hired and announced “relatively soon.”

1:30pm – CB Malkom Parrish has sent in his NLI and is officially a Georgia Bulldog. All 18 commitments plus today’s commitments from McKenzie and Atkinson are now official.

2:20pm – 4-star DE Andrew Williams will be making his announcement in just a few minutes.

2:30pm – 5-star defensive end Lorenzo Carter appears to be the final UGA target still on the board. He announces around 3:30pm on ESPNU.