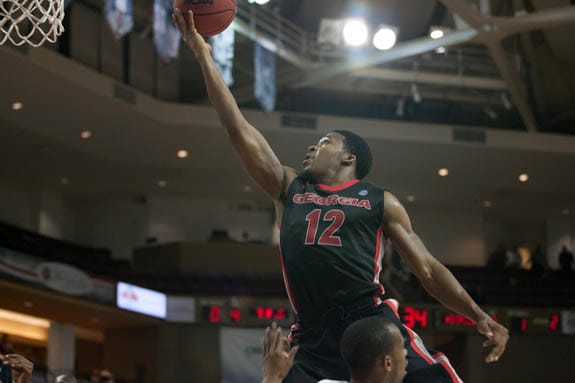 Will Cummings hit a three-pointer with only seven seconds remaining to give the Temple Owls an 83-81 victory over the Georgia Bulldogs in the Charleston Classic Saturday night.

The loss was Georgia’s third straight and drops them to 1-3 overall on the season. Georgia will now face Nebraska on Sunday at 2:30pm ET (ESPN3) in the seventh-place game.

The Bulldogs trailed by 13 points at halftime but battled back to take an 81-80 lead on a Charles Mann layup with only 18 seconds left in the game. Cummings then hit his game-winning shot after a Temple timeout.

But instead of taking a quick timeout, the Bulldogs waited until there were only three seconds remaining. Then on the in-bounds play, the ball went to Donte Williams who missed a three-point shot at the final buzzer.

Temple’s numbers were very similar, and the two teams tied with 30 rebounds and 10 turnovers each.

Kenny Gaines led the Bulldogs with 21 points, while Charles Mann scored 19 and Marcus Thornton 10 for the Bulldogs. Nmanja Djurisic came off the bench to add 10 points.

Playing in his first game after serving a 3-games of internal discipline, Brandon Morris scored eight points and added three rebounds and two assists in 16 minutes of action.