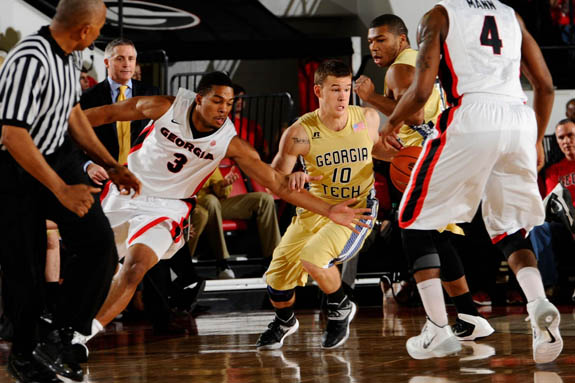 The loss drops Georgia to 1-1 on the season. It was also the Bulldogs’ third consecutive loss to the Yellow Jackets. Georgia Tech is now 3-0 on the season.

UGA and Tech traded baskets and leads throughout the first half. The Jackets had a five point lead a couple of times before the Dawgs made a run to go up three. But Tech would go on a 13-5 run to take a 43-38 lead into halftime.

The Bulldogs closed the gap to three early in the second half, but the Yellow Jackets quickly pulled away with a 12-2 run and led by 15 with 16:31 remaining. The Hoop Dawgs briefly cut the lead to nine, but couldn’t get any closer.

Bad shooting, 10 misses from the free-throw line, and a rebounding disadvantage ultimately led to Georgia’s demise. Tech outrebounded the Bulldogs 49-40 overall and 15-9 on the offensive glass.

Sophomore forward Brandon Morris did not dress for the second straight game as he continues to serve internal discipline imposed by head coach Mark Fox.

Georgia’s next game is Thursday, Nov. 21 against Davidson in the 2013 Charleston Classic. The game is set for a 5 p.m. ET tip-off on ESPNU.